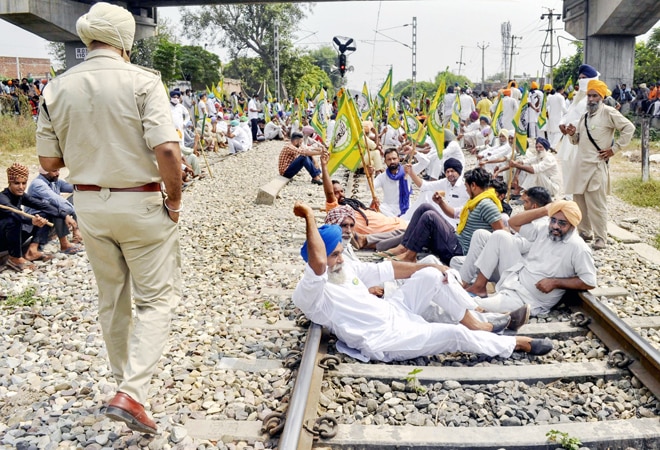 A group of farmers standing on top of trucks raise slogans during the ongoing protest against the Centers new farm laws, at Singhu border

The deadlock between farmers and the government on the three new agricultural laws continued on Friday. Farmers' protest at the Delhi's Singhu border and Tikri border has entered the 16th day. Farmers say that if the Centre does not repeal the three contentious agri laws then they will intensify their agitation. In the past two weeks, several farmers protesting in the Delhi-NCR region have lost their lives mostly due to cold weather.

Here are 10 points about the development in the ongoing farmers' protest:

1) Farmers unions have said that they will block railway tracks, along with highways across the country if their demands are not met by the government. A farmer leader Boota Singh told the media: "We will block railway tracks if our demands are not met. We will decide on the date and announce it soon. The blocking of tracks will not be limited to Haryana and Punjab but it will be done across the country".

2) On the other hand, Union Agriculture Minister Narendra Singh Tomar expressed displeasure with farmers announcing the blocking of railway tracks. Tomar said that it was not proper to announce the next stage of agitation when talks were continuing and urged the unions to return to the discussion table.

3) Until now, the Centre proposed to give a "written assurance" to the farmers that the existing MSP regime for procurement will continue. The government also proposed to make necessary amendments on at least seven issues, including one to allay fears about the weakening of the mandi system.

4) However, farmer leader Shiv Kumar Kakka said five rounds of talks have already been held with the government, but they remained inconclusive. "So far, the government has not sent us an invitation for another round of talks. If the government sends us a proposal for a meeting, we will decide it in our meeting," Kakka added.

5) One of the farmers' bodies,  All India Kisan Coordination Committee (AIKCC) has welcomed the government's gesture to keep the dialogue open with farm leaders. According to B S Mann, founder of AIKCC, committee's suggestions made to the government in June for some changes in the three farm laws have "prima facie" been accepted.

6) Shiromani Akali Dal (SAD) chief Sukhbir Singh Badal slammed the BJP-led Centre, accusing it of trying to thrust the "black laws" upon farmers the way it "imposed" demonetisation and GST in the past.

7) Yesterday, Prime Minister Narendra Modi while laying the foundation stone for a new Parliament building, invoked Guru Nanak to underscore the importance of dialogue and noted that the Sikh Guru had said that interaction should continue till eternity.

8)  A group of sportspersons and farmers have started a laundry service using multiple washing machines at Delhi's Singhu border to help protesters there avoid trips back home to bring back clean clothes. The washing machines run 8-10 hours every day, and farmers' phone numbers and details of their camping location are taken and washed clothes are delivered to them daily.

9) An Uttar Pradesh-based farmer's son, Shakeel Mohammed Qureshi, is selling locally-manufactured warm clothes for free to the protesting farmers at the Delhi-Haryana border. The 35-year-old man has distributed around 300 jackets and sweaters for free among the peasants.

Deloitte's appointment as statutory auditor of IL&FS in 2017-18 'illegal': NFRA