It is an emotional occasion for Gujarat's Alang, also famous as the world's largest graveyard of ships, where the dismantling of the world's longest serving aircraft carrier INS Viraat has begun. After its dismantling at Alang, the once-splendid fighter aircraft will be sold as scrap.

It was a poignant moment for Navy veterans to witness INS Viraat leave the Mumbai Harbour as the Centaur-class aircraft served the Indian Navy for more than 30 years. Here's a look at its eventful journey since its commissioning in 1987:

The bulky warship, which served in the British Royal Navy for 27 years as HMS (Her Majesty's Ship) Hermes was renamed INS Viraat upon its induction into the Indian Navy in 1987. INS Viraat was commissioned into the Indian Navy at the UK's Plymouth on May 12, 1987. After serving the British Navy for 27 years and the Indian Navy for 30 years, this celebrated warship has completed a total 57 years in operational service. The naval fighter is 226.5 m long and has a beam of 48.78m. The INS Viraat has maximum speed of 28 knots or 52 km/hour. The aircraft carrier played a crucial role in strategic and military operations like Operation Jupiter, Operation Parakram and Operation Vijay. 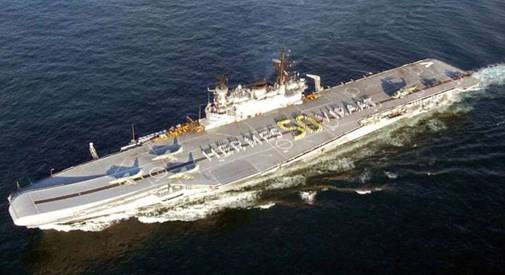 INS Viraat first saw action in Operation Jupiter in 1989 during the Indo-Sri Lanka strife by sending peacekeeping forces to Sri Lanka, post which she was affiliated with the Garhwal Rifles and Scouts of the Indian Army in 1990. INS Viraat also played a substantial role in blockading Pakistani ports, primarily the Karachi port as part of 1999's Operation Vijay. Viraat then saw action in Operation Parakram that took place in 2001-2002, following the terrorist attack on the Indian Parliament.

Nicknamed the Grand Old Lady, this ship has participated in various international joint exercises like in Malabar with the US Navy, Varuna with the French Navy, Naseem-ul-Bahr with the Omani Navy, and was an important part of the annual Theater Level Operation Exercise (TROPEX) in 2014. The illustrious era of the INS Viraat came to an end when it was decommissioned by the Indian Navy in March 2017.

In July 2019, the Central government informed the Parliament that the decision to scrap the INS Viraat was taken after consultations with the Indian Navy. There were also plans mooted by several state governments to convert the magnificent warship into a restaurant or a museum, but none of them ever materialised. Alang-based Shree Ram group purchased it for Rs 38.54 crore at an auction.

During this significant yet emotional occasion at Alang, Union Shipping Minister Hasmukh Mandaviya proclaimed, "Time has come to say thank you INS Viraat." The Union Minister added, "The reason for bringing INS Viraat here is because it has reached 70 years of age and its maintenance expenses were increasing considerably and it was slowly becoming weaker, seeing that there was a need to give it a final farewell." INS Viraat is the second aircraft carrier to be dismantled in India. In 2014, INS Vikrant was broken down in Mumbai.