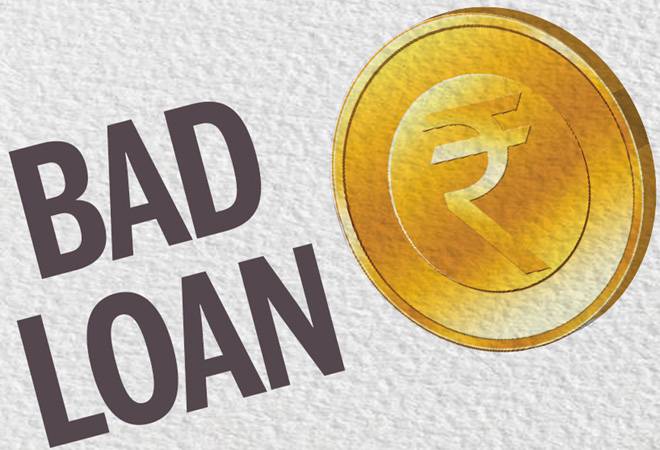 Public sector banks have written off bad loans worth Rs 2.41 lakh crore between April 2014 and September 2017, the NDA government told Rajya Sabha in a written reply on Tuesday.
Banks write off bad loans or non-performing assets (NPAs) at regular intervals as it helps them clear their balance sheets and achieve tax-efficiency, Minister of State for Finance Shiv Pratap Shukla clarified in a written reply.

"As per Reserve Bank of India data on global operations, public sector banks have written off, including compromise, an amount of Rs 241,911 crore from 2014-15 till September 2017," the minister said.

Borrowers, or loan defaulters, continue to be liable for the repayment of dues, and it is an ongoing process under the legal mechanism under the SARFAESI Act and debt recovery tribunals. "Therefore, these write-offs do not benefit the borrowers or the defaulters," he added.

Lashing out at the government, West Bengal Chief Minister Mamata Banerjee, in her Facebook post, said this was a big scam. "I am shocked to see that at a time when farmers are crying and committing suicide for their loan burden and asking for loan waivers, the government is not even considering that," she said. 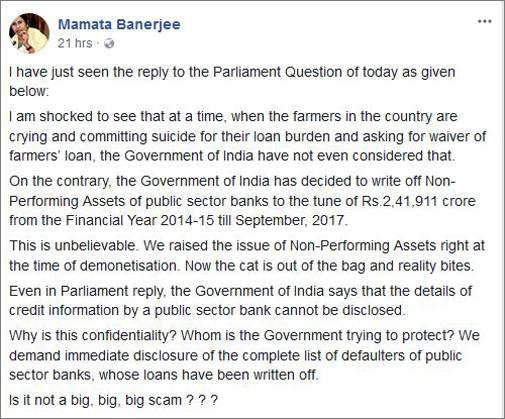 The bad loans has doubled in just five years due to many reasons, like prolonged economic slowdown, profligate lending practices and fraudulent transactions. Recently, state-run lender Punjab National Bank got duped in a Rs 13,000-crore fraud and has unearthed many other fraudulent cases.

As of December 31, 21 state-run banks, which is almost two-thirds of the banking assets in India, had stressed loans worth Rs 8.26 lakh crore.

The bad loan pile for private sector bank was about Rs 1.1 lakh crore, or 4.6 per cent their total loans. Foreign banks operating in India have reported bad loans worth Rs 14,426 crore, or 4.1 per cent of the total money they lend.

While the government is trying to bring ways to resolve bad loans under the bankruptcy court process, experts and analysts say the worst of the stressed loan woes for the system is yet to come.