The monthly average of GST revenue for FY19 was 9.2 per cent higher than the previous fiscal, which shows that GST collections have been picking up recently despite rate rationalisation measures. This is the thid time in FY 2018-19 that GST collections have crossed the Rs 1 lakh crore mark.

The GST collection for the month of March reached Rs 1.06 lakh crore, marking the highest ever mop-up recorded under the unified tax regime since its introduction. The record high came on the back of higher compliance and increase in GST returns filed. The total number of GSTR-3B filed till March 31 for the month of February stood at 75.95 lakh. 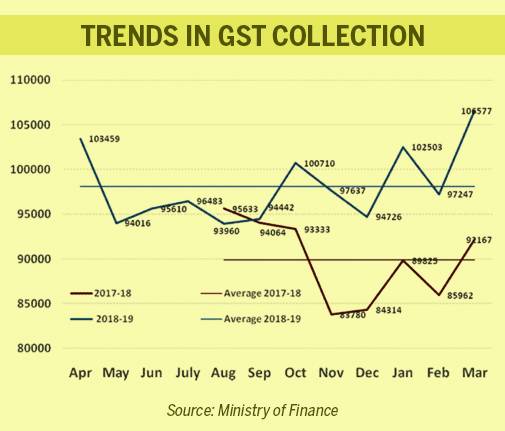 The monthly average of GST revenue for FY 2018-19 was reported to be Rs 98,114 crore, which is 9.2 per cent higher than the previous fiscal. These figures reflect that the GST collections have been gathering pace in the recent months despite rate rationalisation measures, the ministry said.

"Further, Rs 20,000 crore has been settled from the balance IGST available with the Centre on provisional basis in the ratio of 50:50 between Centre and States. Total revenue earned by Central Government and the State Governments after regular and provisional settlement in the month of March, 2019 is Rs 47,614 crore for CGST and Rs 51,209 crore for the SGST," the Finance Ministry said.

Here are 7 income tax, GST changes that you should know about in the new financial year