GST Meeting News Updates: Meeting was attended by MOS Anurag Thakur, besides finance ministers of states and UTs and senior officers from Union government and states 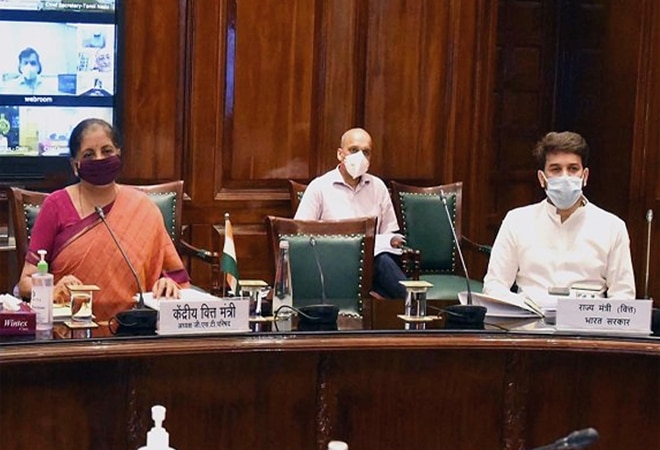 Finance Minister Nirmala Sitharaman is chairing the 41st GST Council meeting via video conferencing in New Delhi today. The meeting was attended by MOS Anurag Thakur, besides finance ministers of states & UTs and senior officers from Union government and states. The Finance Minister held a virtual media briefing on the outcome of the meeting following the meeting.The meeting took place amid a major revenue shortfall for both Centre and states. Non-BJP ruled states have made their anger clear over the Centre's inordinate delay in paying GST compensation. Some states have started calling for more say in ways to raise GST collection if the Centre fails to compensate the states.

Check out all the latest updates on 41st GST Council meeting on BusinessToday.In live blog

5:15 PM: "There may be some states that might prefer to get hard-wired compensation rather than going to market to borrow. The option was tailor-made so that states can take a call depending on compensation they expect to come. Govt will give a further relaxation of 0.5% in states' borrowing limit under FRBM Act as second leg of Option 1. States can choose to borrow more, beyond expected compensation itself, since that is the injury caused by coronavirus," said Sitharaman.

4:54 PM: Finance Minister Sitharaman said, "Once the arrangement is agreed upon by GST Council, we can proceed fast and clear these dues and also take care of the rest of the financial year. These options will be available only for this year."

4:52 PM: Two options have been presented: One is to provide a special window to states, in consultation with RBI to provide Rs 97,000 crore at a reasonable interest rate. The other one is that the entire GST compensation gap of Rs 2,35,000 crore of this year can be met by states, in consultation with RBI. These options will be sent to states for a view within seven days.

4:49 PM: Compensation gap is due to coronavirus pandemic as well. The shortfall in compensation due to the implementation of GST has been estimated to be Rs 97,000 crore

4:46 PM: As mentioned by Finance Minister in GST Council meeting held in March, legal views of the matter were sought from the Attorney General of India who said that GST compensation has to be paid for transition period from July 2017 to June 2022: Finance Secretary Ajay Bhushan Pandey

4:30 PM: GST collection has been severely impacted this year, due to pandemic. As per GST Compensation Law, states need to be given compensation: Finance Secretary

1.47 PM: GST cut on two-wheelers back on the table

A GST cut on two-wheelers is back on the table after FM Nirmala Sitharaman said they are not sin product. Motorcycles, scooters and mopeds are in the highest slab of 28% GST right now. A 10% cut to the next slab of 18% will see significant reduction in prices. The sale of two-wheelers has declined by over 60% in first four months of this fiscal so far. Motorcycles are witnessing a faster recovery in sales.

Under the current GST structure, taxes are levied under four slabs -- 5, 12, 18 and 28 per cent. The government also charges a cess on luxury, sin and demerit goods on items under the 28 per cent tax slab. The funds collected via this cess are shared with states to meet the revenue shortfall.Since FY16, states are entitled to get 14 per cent hike in revenue for the next five years till 2022, though COVID-19 has badly hit the Centre's coffers. The Centre has been of the view that states can be compensated for the revenue shortfall from compensation cess only.

Also read: GST meet: From talks on compensation to market borrowings; here's what to expect today

11.50 AM: None of contention between Centre, states

States have not been compensated since May. The issue of GST compensation has become a bone of contention between the Centre and states, with the government clearly telling the parliamentary standing committee on finance that it's in no position to pay for the GST dues to states as per the current revenue sharing formula as the COVID-19 has severely affected the businesses.

11.40 AM: GST Council may find more ways to raise funds

Even as states and Centre are likely to deliberate on finding ways to fill the compensation gap, some states have called for more say in ways to raise GST collection if the Centre fails to compensate them.

11.30 AM: Will Centre and States find middle path?

With the Central government showing inability to compensate states for revenue losses as per the agreed formula under Goods and Services Tax (GST), the question is whether the two sides can find a middle path between GST and the older tax regime where states had more say on the revenue collected.

The Goods and Service Tax (GST) Council members in their virtual meeting on Thursday will discuss the crucial single point agenda of compensation to states. The members will discuss ways to address the issue of revenue shortfall, including borrowing from market, as COVID-19 pandemic affects the entire Indian economy.

Finance Minister Smt. @nsitharaman will chair the 41st GST Council meeting via video conferencing at 11 AM in New Delhi today. The meeting will be attended by MOS Shri. @ianuragthakur besides Finance Ministers of States & UTs and Senior officers from Union Government & States. pic.twitter.com/HeqCaGwMbc