Top sources in the BJP say the Modi 2.0 Cabinet will be a lot younger than the earlier one and nearly half the ministers would be fresh entrants. The new entrants will not only bring energy but also determine the party's new priorities in terms of caste equations and geography. 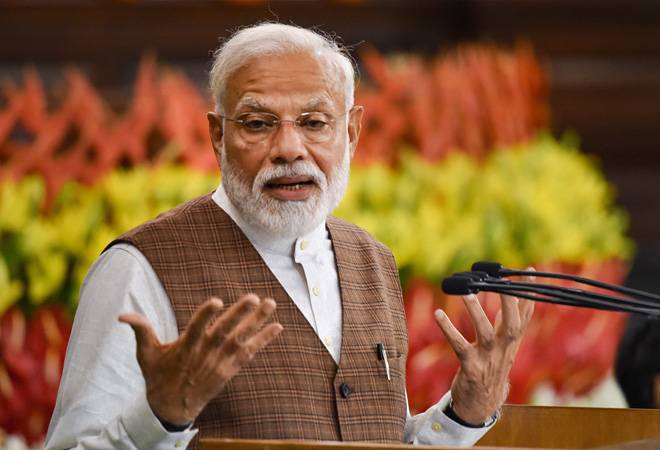 It is expected that 45-47 ministers will take oath with the Prime Minister. Photo credit: PTI

As the forecourt of the Rashtrapati Bhawan is being decked up for swearing in of Prime Minister Narendra Modi, the top leadership of the Bharatiya Janata Party (BJP), its allies in the National Democratic Alliance (NDA), and the Rashtriya Swayamsevak Sangh (RSS) are in discussions about who would be inducted in his cabinet.

Top sources in the BJP say the Modi 2.0 Cabinet will be a lot younger than the earlier one and nearly half the ministers would be fresh entrants. It is expected that 45-47 ministers will take oath with the Prime Minister. The new entrants will not only bring energy but also determine the party's new priorities in terms of caste equations and geography. It will also accommodate partners like the JD(U), the AIADMK and the Shiv Sena (its sitting Cabinet minister has lost in these elections).

Hardeep might get a role again. Alphons, the only Christian in the previous regime, might make way for V. Muraleedharan, the BJP's former Kerala unit chief. Separately, Sushma Swaraj, Uma Bharati and Birendra Singh have opted out. Two others, Vijay Sampla and Rajen Gohen, didn't get tickets. These are the open vacancies. Meanwhile, the party is considering making either Santosh Gangwar or Radha Mohan Singh the Speaker of the 17th Lok Sabha.

The party had earlier decided to offer slots to Arun Jaitley and Sushma Swaraj. Jaitley has apparently written to the prime minister to not consider him for the next cabinet. According to sources, Swaraj might be made a Rajya Sabha MP from Gujarat. Smriti Irani and Amit Shah, who have won the Lok Sabha polls, will vacate their seats. To fill these gaps, apart from party chief Amit Shah, two general secretaries, Anil Jain and Bhupender Yadav, and national vice presidents Saroj Pandey and Vinay Sahasrabuddhe, can be inducted. Jain was election in-charge of Chhattisgarh and his idea of replacing all the sitting MPs in the state worked.

The party, as a result, won eight out of ten seats, that too after being drubbed in the Assembly polls just a few months ago. Yadav, Jaitley's protege who is equally close to Amit Shah, has a strong RSS background. He was General Secretary of advocates' body of the RSS, the Akhil Bharatiya Adhivakta Parishad, before joining the BJP. Sahasrabuddhe runs the party's think-tank Public Policy Research Centre and the RSS-backed research outfit Rambhau Mhalgi Prabodhini. He was considered for a cabinet slot in the previous regime as well but it didn't work out.  Pandey, a first-time Rajya Sabha MP, is being weighed against Renuka Singh, a first-time MP from Surguja in Chhattisgarh.

Sources told Business Today that PM Modi has made up his mind to bring in fresh talent and balance it with experienced political warhorses. Shiromani Akali Dal, the BJP's ally in Punjab, wants a Cabinet berth for their chief Sukhbir Singh Badal, replacing his wife Harsimrat Badal, who headed the ministry of food processing industries in the previous government. Sukhbir Badal was MoS in Atal Bihari Vajpayee's regime. The LJP, too, wants Chirag Paswan to be a part of the Cabinet instead of his father Ram Vilas Paswan. He might get MoS with independent charge.

It is expected that BJP's smaller partners will get one slot of minister of state, and the bigger partners will get one Cabinet and one minister of state positions. Partners such as SAD and LJP may get a Cabinet berth each. Bihar will see Cabinet induction from JD(U)'s quota. The names of Rajya Sabha MP and close confidant of Bihar CM, Ram Chandra Prasad, and his current Cabinet colleagues Dinesh Chandra Yadav and Lalan Singh are making rounds. Sources told BT that JD(U) and Shiv Sena are lobbying for two Cabinet berths each. After the poll defeat of Cabinet minister Anant Geete, Shiv Sena has the name of Anil Desai ready. The next name will come once they get clarity on the number of slots they are getting. Bihar Chief Minister Nitish Kumar had a two-hour long meeting with Amit Shah at his residence to discuss the names of ministers from Bihar - from BJP, LJP and JD(U) - to adjust the caste combinations.

The other names include Hoshiarpur MP, former IAS officer and Dalit face Som Prakash; RSS and BJP old timer G. Kishan Reddy from Telangana; Dilip Ghosh, Khagen Murmu, Debasree Chaudhary from West Bengal; and former bureaucrat Aparajita Sarangi, Rita Bahuguna Joshi from Odisha. Reddy, an RSS old timer and protegee of Vice President M. Venkaiah Naidu, had contested against the then prime minister Narasimha Rao as an independent backed by BJP in 1991. Meanwhile, it is expected that many of the faces from Madhya Pradesh, Rajasthan, Uttar Pradesh and Bihar will make way for those winning from West Bengal, Odisha and Telangana. Names of sons of two former chief ministers, Anurag Thakur and Dushyant Singh, are also being considered.

With three Rajya Sabha MPs winning the Lok Sabha polls - eight Rajya Sabha seats due for elections in next two months - BJP can bring in four leaders via the Rajya Sabha route. One seat is promised to ally AGP. BJP top leaders shared with BT names of Hemant Biswa Sarma and Vijay Chauthaiwale. Both Sarma and Chauthaiwale may join the Cabinet as well. Chauthaiwale is head of the Overseas Friends of BJP and an old timer in RSS. He is a close confidant of both PM Modi and party chief Amit Shah. He worked on both 2014 and 2019 campaigns and spearheaded PM Modi's diaspora outreach plans. Sarma remained a key find for Shah in is operation North East. He also played a pivotal role in engineering social equations in North West Bengal. Steel Minister Birendra Singh offered to resign as Rajya Sabha MP upon selection of his son as the party's candidate for the Hisar seat. He won, defeating sitting MP Dushyant Chautala.

PM Modi promised that Modi 2.0 will be different, and his choice of ministers will set the tone for at least the first half of his tenure.