India a real friend, China took 'naive' US for a ride: Nikki Haley 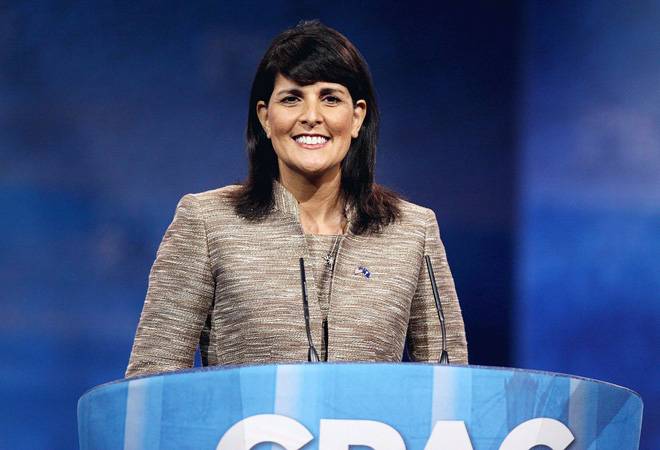 China has taken a "naive" US and its leaders for a ride over the past several decades, according to former top Indian-American diplomat Nikki Haley, who said the Trump administration through its robust Indo-Pacific strategy is now learning who its real friends are.

Speaking at the third India-US Leadership Summit organised virtually by the US India Strategic and Partnership Forum (USISPF), former US Ambassador to the UN Haley on Tuesday said Americans know that Indians are not a threat to them and as such, it is time for Indians to share their success story.

The US has been pushing for a greater role for India in the strategic Indo-Pacific which is seen by many countries as an effort to contain China's growing clout in the region. "Let's acknowledge how China did it. China was very strategic. This was very planned out and America was very naive. The thought leaders in America thought that if we were nice to China, if we open doors to China, it would become more like the West, that China would become more democratic," Haley said.

Responding to a question from Mastercard CEO and president Ajay Banga, she said this was from both sides of the aisle -- Republican and Democrat leaders, all of whom thought that if the US was nice to China, there would be an alliance. What the United States has to understand that the Chinese want to be communist and that they are not going to change, the 48-year-old former diplomat said.

"Through this Indo-Pacific strategy, going forward America is learning who its real friends are. When you learn that, yes, it's India. But now Indians need to go and show more of who they are," she said. Explaining, she said that when people come across Indian businesses or an Indian professor or a doctor, they see the warmth, intelligence and genuine side of them, and they want to know more.

"What we have to do is not be shy. But really get out there and brag about ourselves. Now is the time for Indians to be proud, be okay talking about those accomplishments and be okay talking about their successes and let chil9dren talk about their accomplishments. That's really important going forward because...we have to make sure that we take to the next level," said Haley, whose parents emigrated from Amritsar in Punjab.

"Americans are not threatened by Indians and realise that Indians make our country better," she said. Haley is considered a top contender for the Republican ticket to the US presidential race in 2024. Responding to a question, Haley asserted that the Indo-Pacific Strategy of the Trump administration has been a real game changer for India-US relationship.

"When this administration took on the Indo-Pacific strategy, it was a real game changer for a lot of reasons. I had often thought that the US seemed to ally a little bit more with Pakistan and a little bit less with India, she said. "It just makes sense that the US and India are natural allies. We have the same values...," she said, adding that President Donald Trump very much saw that as well.

"So it was a way of saying we're going to start looking at things differently. We've seen that play out with the alliance that we see with the United States, India, Australia and Japan (a reference to the Quad group of countries). We are continuing to see that strengthen," she said.

From the military standpoint, the US and India have done well, Haley said, noting that the two countries still have some work to do on trade. "I'm hoping that we can break down some of those barriers that India has with tariffs on the United States. We will get there as well too," she said optimistically.

Also read: US strategy is to push back against China in every domain: top diplomat

"This has been groundbreaking for a number of reasons. We have to continue to build on that because as we look at mutual threats that we have, whether it's with China or what India has seen with Pakistan and going forward, I think it's all the more reason why we should find other ways to be strengthened and work together," Haley said.