The 50th annual meeting, held in January 2020, was the last major global event before almost the entire world got locked down due to the coronavirus pandemic 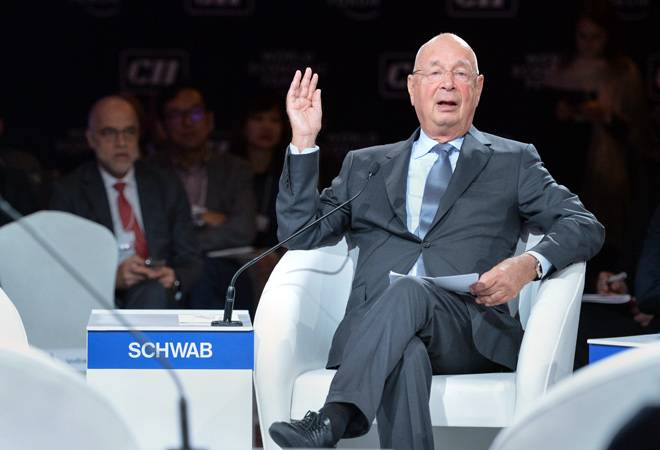 Bullish on India's power to shape the global agenda, the WEF's Founder and Chairman Klaus Schwab has said the country''s early policy response to the COVID-19 pandemic was strong and now its biggest opportunity lies in leapfrogging to a more digital and sustainable economy.

He further said he remains optimistic about India and as the country continues its quest to build "a stronger and more equal nation, the world will watch it for inspiration." "With its demographic advantage and extensive diversity, India has the power to shape the global agenda and define our collective future," Schwab told PTI in an interview from Geneva where the World Economic Forum (WEF) is based.

Schwab, who founded WEF over 50 years ago, said, "The early policy response in India to mitigate the impact of the pandemic was strong; from an early lockdown, to large-scale food rations to over 800 million people risking starvation, to collateral-free credit for small businesses."

"But what it couldn''t prevent is that this pandemic has put millions of informal workers, low-income migrant workers and daily-wage earners in a state of extreme insecurity. Protecting their lives and livelihoods is the prime concern today, as it could lead to an even deeper, humanitarian crisis on the back of the ongoing public health crisis," he said.

Schwab said as India focuses on building a better future after the pandemic, "its greatest opportunity probably lies in its efforts to leapfrog to a more digital and sustainable economy".

He further said sadly there was clearly a lack of epidemic preparedness in many countries. "The notion that a pandemic is a once-in-a-hundred-year event, made many governments and business leaders conclude it was not an immediate threat. In the spring and summer, we paid the price for that."

But what matters now, is what we do to put an end to the pandemic as soon as possible, and how we deal with the ongoing threat of a severe second wave, he noted. "It is important we all come together and support those in charge of providing healthcare, whether in the public or the private sector," Schwab said.

He observed the responsibility of epidemic preparedness lies primarily with the government and public health authorities, and less with the private healthcare or pharmaceutical sector in many countries.

"Governments, notably, are responsible for providing a strategic stock of healthcare supplies. In the countries with a public healthcare system, it is also the responsibility of those who manage these systems, to ensure there is enough capacity in hospitals, and enough supply of crucial equipment like respirators," he noted.

The WEF describes itself as an international organisation for public-private partnership and has been known for various studies and global events hosted by it, including the high-profile Davos Annual Meeting every year on the Swiss Alps that is attended by thousands of world leaders.

The 50th annual meeting, held in January 2020, was the last major global event before almost the entire world got locked down due to the coronavirus pandemic. The next annual meeting has now been postponed to May 2021 and will be held in Lucerne-Burgenstock in Switzerland, instead of Davos.

Schwab has co-authored a book, titled ''The Great Reset'', which deals with top priorities before business leaders and policymakers around the world in the wake of the coronavirus pandemic. The book also talks about whether the world should get back to where it was before, or should it take the opportunity to make society fairer, smarter and greener, and get humanity off the road to climate catastrophe.

In the interview, Schwab said the world is at a turning point for humanity today. "COVID-19 is the most devastating and immediate crisis we are facing, but we are equally going through the worst environmental crisis in human history as well. And socio-economically, the division and inequalities we are facing are the worst in a generation," he said.

The WEF founder said this scenario cannot be dealt with incrementally and what is needed is ''A Great Reset'' -- a fundamental rethinking of our economies and of our societies.

"We must not only repair the damage but address major deficiencies in our economic and social systems which were apparent before the pandemic broke out. One of the priorities for the Great Reset is to re-define our social contract. That is particularly relevant for emerging economies like India, who have not yet built up social welfare systems to the same degree as some countries in Europe, such as the Scandinavian countries," he said.

US welcomes India's rise as a leading regional and global power