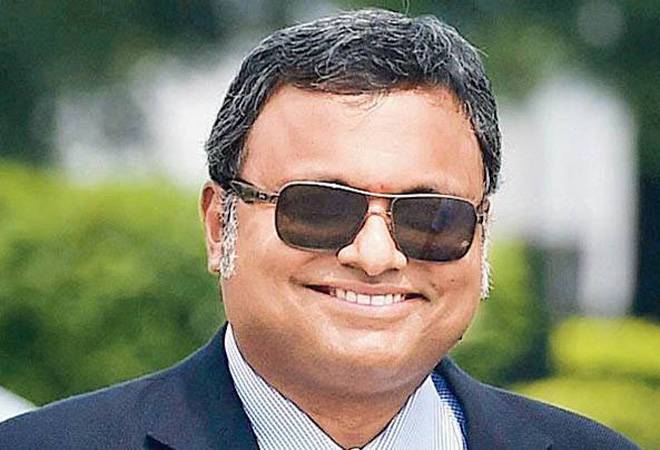 Earlier, the Central Bureau of Investigation (CBI) had sought 14 days of custodial interrogation for Karti as his one-day judicial custody expired on Thursday. Chidambaram was produced before special CBI judge Sunil Rana in the Patiala House Court.

The CBI arrested Karti in connection with INX Media money laundering case on Wednesday morning. The agency later produced him before the duty magistrate Sumeet Anand where it sought 15-day remand for the custodial interrogation. However, the duty magistrate granted only one day's custody.

7.31pm: Karti Chidambaram has said he will be "vindicated" in the INX media case eventually.

6.59pm: The court has allowed Karti Chidambaram's lawyer to meet him for one hour in the morning and one hour in the evening. Medicines are allowed only on prescription but home food is not allowed.

Delhi: P Chidamabaram leaves from Patiala House court after hearing against his son #KartiChidambaram in #INXMediaCase ; Karti has been sent to CBI custody till 6th March pic.twitter.com/g8Wxrkh3si

6:48 pm: Karti Chidambaram sent to 5-day CBI custody. The CBI to conduct medical examination on him.

15:50 pm: There is no ground for custodial interrogation. How can CBI claim non-cooperation when they haven't issued summons? All documents are in their possession: Karti Chidambaram's counsel Abhishek Manu Singhvi in Patiala House Court.

15:45 pm: There is clear evidence of links between Karti Chidambaram and various companies. We have emails and invoices indicating money was given to Advantage Strategic Consultancy Private Limited in the time period when INX Media received favours: CBI told special CBI Judge.

15:30 pm: Karti's mother Nalini Chidambaram, who is also a senior advocate, was seen sitting with him in the court. Senior advocate Abhishek Manu Singhvi is leading the team of advocates for Karti.

14: 35 pm: The Enforcement Directorate is also present in the Court. The agency wants joint interrogation of Karti Chidambaram and his Chartered Accountant S Bhaskararaman: Report

14:10 pm: Karti Chidambaram has arrived at the Patiala House Court to appear before the Special CBI Judge in INX Media money laundering case.