In a press conference on Friday, Chief Election Commissioner Sunil Arora announced that Jharkhand Assembly polls will be held in the state on November 30, December 7, 12, 16 and 20 Voting for 81-seat Jharkhand Legislative Assembly will be held in five phases between November 30 and December 20.

The Election Commission of India announced the Jharkhand Assembly election dates on Friday. All 81 Legislative Assembly seats in the state will go to polls in five phases, between November 30 and December 20. Results will be announced on December 23. Model code of conduct has come into effect in Jharkhand after the announcement.

The 5-year tenure of the present Assembly in Jharkhand ends on January 5 next year. The BJP is in power in the state and an alliance of opposition parties, mainly the Congress and the Jharkhand Mukti Morcha, is making a determined bid to oust the government headed by Chief Minister Raghubar Das.

Below are the important dates for Jharkhand Assembly elections: 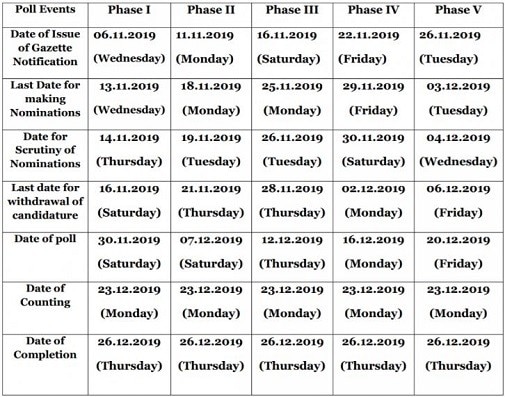