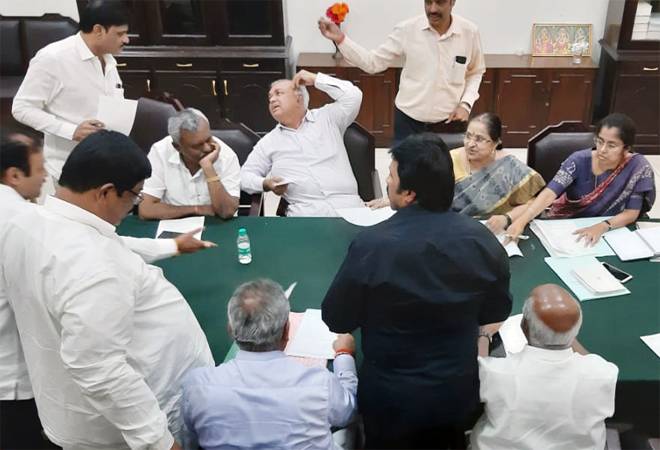 The ruling coalition Janata Dal (Secular) and the Congress government in Karnataka is in deep crisis as their 12 MLAs have resigned from the parties. According to an India Today report, many Congress and JDS MLAs are lined up outside Karnataka Assembly Speaker's office and have submitted their resignation to speaker KR Ramesh Kumar.

Among those who have submitted their resignation are Congress MLAs Mahesh Kumthalli, BC Patil, Ramesh Jarkiholi, Shivaram Hebbar, ST Somashekar, Muniratna, Pratap Gowda and Byrathi Basavaraj. H Vishwanath, Narayan Gowda and Gopalia from JDS have also tendered their resignation.

Meanwhile, four more Congress MLAs, including ex-minister Ramalinga Reddy, have also arrived at the speaker's office to submit their resignations, and soon meet the state Governor to apprise him about the same.

"I was supposed to pick up my daughter that is why I went home, I have told my office to take resignations and give acknowledgement that 11 members resigned .Tomorrow is leave so I will see them on Monday," Karnataka Assembly Speaker Ramesh Kumar told ANI.

Speaking to the media, Ramalinga Reddy said, "I am not going to blame anyone in the party or the high command. I somewhere feel I was being neglected over some issues. That is why I have taken this decision."

Speculation was rife in the political arena that several MLAs from the ruling coalition may resign after Congress MLAs Anand Singh and Ramesh Jarkiholi resigned from the government earlier this week.

Karnataka State minister D. K. Shivakumar also reached assembly speaker office. He said that nobody will resign. I had come to meet them.

Karnataka State minister D. K. Shivakumar: Nobody will resign, I had come to meet them(8 Congress& 3 JDS MLAs who had reached Assembly speaker office) pic.twitter.com/cwGVK895jx

Meanwhile, Karnataka Chief Minister HD Kumaraswamy is in the Unites States currently, and is expected to return Bengaluru on Sunday.

Taking jibe at the on-going crisis in the ruling coalition government in Karnataka, BJP leader GVL Narasimha Rao said, "People of Karnataka are sick of this political coalition. We have been noticing the developments. They finally realised the chaos that had been created in the state. Not just BJP but even people of Karnataka will heave a sigh of relief. For the BJP, we have been looking at what has been going on for quite sometime now."