J&K integral part of India, only dispute left now is about PoK: India at UN 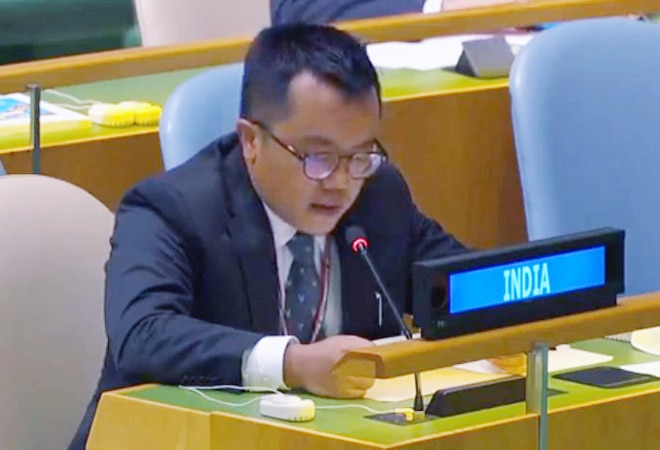 India has responded to Pakistan Prime Minister Imran Khan's address at the 75th United Nations General Assembly (UNGA), saying J&K is an integral part of India. Exercising its right to reply in response to Khan's comments, India said all new rules brought in J&K are its "internal affair".

Mijito Vinito, the Indian delegate at the UNGA, presented India's stand on the issue. Tearing into Imran Khan, First secretary Vinito through the UNGA sought Pakistan to vacate all the illegally occupied areas of Kashmir.

This Hall heard incessant rant of someone who had nothing to show for himself, who had no achievements to speak of, & no reasonable suggestion to offer to world. Instead, we saw lies, misinformation, warmongering & malice spread through this Assembly:Mijito Vinito,First Secy(2/5) https://t.co/itmYe5yfuj

Notably, Imran Khan, in a pre-recorded statement played at the UNGA session on Friday, had said that Pakistan has always called for a "peaceful solution". "To this end, India must rescind the measures it has instituted since August 5 in 2019," he said.

The Indian representative said there's no dispute left in Kashmir and that the only dispute now is with regard to illegally occupied Kashmir by Pakistan.

Vinito said Imran Khan's "rant" at the UNGA was full of "lies, misinformation, warmongering and malice".

"This Hall heard the incessant rant of someone who had nothing to show for himself, who had no achievements to speak of, and no reasonable suggestion to offer to the world. Instead, we saw lies, misinformation, warmongering, and malice spread through this Assembly. The words used today at this great Assembly by the leader of Pakistan (Imran Khan) demean the very essence of the United Nations," he said.

After Imran Khan's speech, TS Tirumurti, India's permanent representative to the UN, had said the country would exercise its "Right to Reply". A country can exercise the right to reply if it wishes to respond to statements made by any other country against it. This week alone, India has exercised its right to reply to Pakistan thrice over the issue of J&K.

Slamming Pak PM for calling dreaded terrorist Osama Bin Laden a "martyr" in Pakistan's Parliament this year, Vinito said the tenets of modern civilised society like peace, dialogue and diplomacy are farfetched for a country like Pakistan.

Vinito said Khan had admitted in the US in 2019 that there were over 30,000-40,000 terrorists in the country who were trained against Afghanistan and India by the Pakistani army. He said Pakistan is the same country that has indulged in the ethnic cleansing of minority religions including Hindus, Sikhs, Christians and others.

Vinito said rather than discussing lies of Pakistan, the assembly should discuss Pakistan's unrelenting support to political and terrorist organisations and mercenaries. This is the only way it can become a normal society, the first secretary said.