The offer that wasn't: How everyone bought UAE's Rs 700 crore aid for Kerala 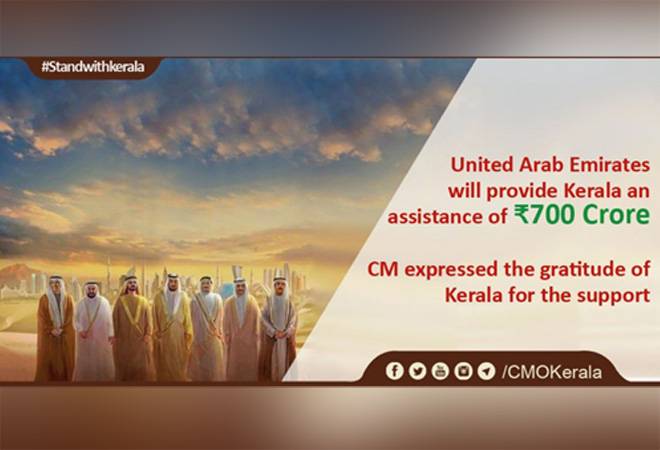 Just hours ago, Indians were debating whether turning down a generous aid worth Rs 700 crore for Kerala floods was the right thing to do or not. In an unexpected volte-face, it now seems that the offer was only a figment of someone's imagination. People tend to take things seriously when the government, a chief minister no less, says something. This is precisely why the news about Kerala being offered $100 million aid by the oil-rich Gulf nation spread like a wildfire.

Soon after the state government announced the magnanimous assistance by a country which has a considerable population of Keralites - over 7 lakh according to some estimates - the rumour mills went into an overdrive and began comparing the Centre's Rs 600 crore initial aid package with 'UAE's Rs 700 crore' largesse.

So how exactly did the Kerala government get it so wrong?

On August 21, Kerala CM Pinarayi Vijayan tweeted that the United Arab Emirates will provide Kerala an assistance of Rs 700 crore. "Kerala has a special relationship with UAE, which is a home away from home for Malayalees. We express our gratitude to UAE for their support," he tweeted.

According to Kerala CM, his only source for this information was UAE-based Malayali businessman and philanthropist Yusuff Ali MA, the managing director of Lulu Hypermarket which owns the largest retail chain in the Middle East.

Vijayan had informed the media about the UAE's aid and thanked them for their 'timely' help. "Today morning, Sheikh Mohammed bin Zayed bin Sultan Al-Nahyan, the Crown Prince of Abu Dhabi, informed our Prime Minister about their contribution for Kerala and this was conveyed to me by M.A. Yusuf Ali (who owns Lulu Supermarkets)," Kerala CM had said.

The CM just didn't stop after thanking the Crown Prince of Abu Dhabi.

On this occasion, we also express the gratitude of Kerala to HH Sheikh Khalifa bin Zayed Al Nahyan, President of the UAE and the Emir of Abu Dhabi, and HH Sheikh Mohammed bin Rashid Al Maktoum ( @HHShkMohd), Prime Minister of UAE and Emir of Dubai. #KeralaFloodRelief

Not to be outdone, Kerala's Finance Minister Thomas Isaac even compared the central government's policy of not accepting foreign aid to 'a dog in the manger' attitude.

We asked Union Gov for financial support of ₹2200 Cr ; they grant us a precious ₹600 Cr . We make no request to any foreign gov but UAE gov voluntarily offer ₹700cr. No, says Union gov , it is below our dignity to accept foreign aid. This is a dog in the manger policy.

The UAE government, however, has set up a national emergency committee to assess the situation in Kerala.