Longest suspension bridge over Indus river opens to public; here's all you need to know

The 260-feet long bridge is likely to give a major boost to connectivity in remote areas in Ladakh. 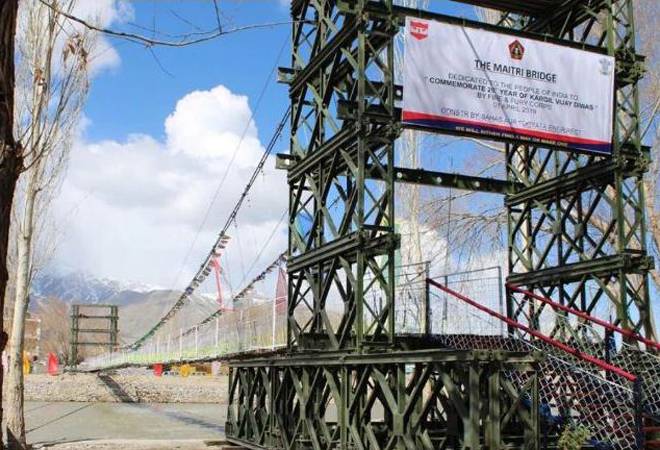 Indian Army built the longest suspension bridge over Indus river in Leh in just 40 days, making a record of its own. Named Maitri Bridge, the construction of the bridge was undertaken by the combat engineers of 'Sahas aur Yogyata' regiment of 'Fire and Fury Corps' of the Indian Army. The bridge is built using around 500 tonnes of bridge equipment and construction material.

The 260-feet long bridge is likely to give a major boost to connectivity in remote areas in Ladakh. The cable suspension bridge that has been opened for the public was constructed to help the residents of Choglamsar, Stok and Chuchot villages, which are the largest villages in the Ladakh region, according to a report in Financial Express.

The bridge was inaugurated on Monday in the presence of senior war veterans from Ladakh region along with Lt Gen YK Joshi, AVSM, VrC, SM and General Officer Commanding 'Fire and Fury Corps', reported the daily.

The central government had emphasised on building an all-weather road connectivity in the region. An all-weather road was built from Manali to Ladakh via Zanskar in Kargil last year. Similarly, the work for the Zojila tunnel, which is Asia's longest, has also been started. These projects were part of the Rs 25,000 crore projects allocated by the Centre for the state of Jammu and Kashmir.

Last year, in June 2018, the Border Roads Organisation (BRO) opened a vital 35-meter bridge in the Ladakh region to ease vehicular movement to the base camp of Siachen Glacier, which is the world's highest battlefield.

Also read: Construction of her statues in UP represent "will of the people", Mayawati tells SC