"Had my advice been heeded, the loss of lives and largescale damage to property at the project site could have been prevented. The mindless rampaging on the Himalayas in the name of development must stop," says Magsaysay awardee Chandi Prasad Bhatt 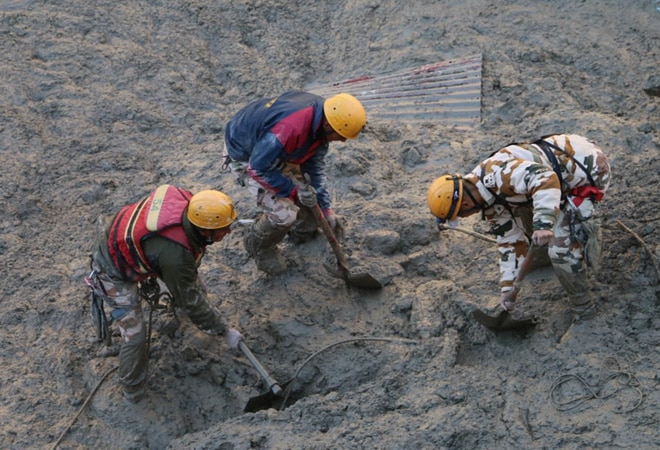 The glacial burst near Chamoli district''s Raini village, the cradle of the Chipko movement, should serve as a wake-up call to stop the rampage on the Himalayan ecological system in the name of development, said Magsaysay awardee Chandi Prasad Bhatt on Monday.

According to the 87-year-old environmentalist, who was a Chipko movement leader, projects like the Rishi Ganga hydel project, which bore the brunt of Sunday''s calamity, should not have been given environmental clearance.

Bhatt said that in 2010 he had written to the then environment minister warning against the adverse effects of the project.

"Had my advice been heeded, the loss of lives and largescale damage to property at the project site could have been prevented. The mindless rampaging on the Himalayas in the name of development must stop," he said.

A portion of the Nanda Devi glacier broke off in Uttarakhand''s Chamoli district on Sunday, triggering an avalanche and a deluge in the Alaknanda river system that washed away hydroelectric stations, leaving at least 10 people dead and 143 missing, who are feared dead.

The sudden flood in the middle of the day in the Dhauli Ganga, Rishi Ganga and Alaknanda rivers -- all intricately linked tributaries of the Ganga -- triggered widespread panic and large-scale devastation in the high mountain areas.

Two power projects -- NTPC''s Tapovan-Vishnugad hydel project and the Rishi Ganga Hydel Project -- were extensively damaged with scores of labourers trapped in tunnels as the waters came rushing in.

Pointing out that the Himalayas are too delicate to bear too much human intervention, Bhatt, who has also been honoured with the International Gandhi Peace Prize, said, "Sunday''s avalanche was a wake-up call and so was the 2013 Kedarnath deluge in which thousands perished but authorities refuse to learn from natural calamities."

A devastating natural disaster in the form of torrential rains of unseen magnitude had struck Kedarnath on 16-17 June in 2013.

The banks of the Chorabari lake in Kedarnath collapsed due to a cloudburst that had resulted in a major flash flood causing widespread destruction in Uttarakhand and led to heavy losses to infrastructure, agriculture lands, human and animal lives.

"The Chipko movement had begun from Raini village after largescale devastation in the Rishi Ganga and Alakananda Valleys caused by a devastating flood in 1970. The flood awakened the locals to the need of saving the forests of Raini," said Bhatt who lives in Gopeshwar told PTI.

The movement had resulted in a ban on cutting of trees in the catchment area of the Alaknanda river, he said.

Women from Raini village of Uttarakhand had started the movement in the 1970s by clinging onto trees to prevent them from being cut. Though the movement was started to prevent the felling of trees, it went on to become an inspiration for environment conservation.

Bhatt also underscored the need for updating the knowledge of the ecological system connected with places where rivers like the Ganga and its tributaries originate in the Himalayas.

"On the points where the Ganga or its tributaries originate there are not only glaciers but also lakes of varying sizes, big and small, about which our knowledge is negligible. It needs to be augmented," he said.

"We need to identify such lakes and glaciers, show them on our maps and keep a tab on them. An effective mechanism of sharing basic information on their vulnerability with the local administration and the local populace should also be developed," Bhatt stressed.