Ahead of presenting the budget on July 5, Sitharaman carried a red-coloured cloth bag instead of a leather suitcase which went viral on various social media platforms. 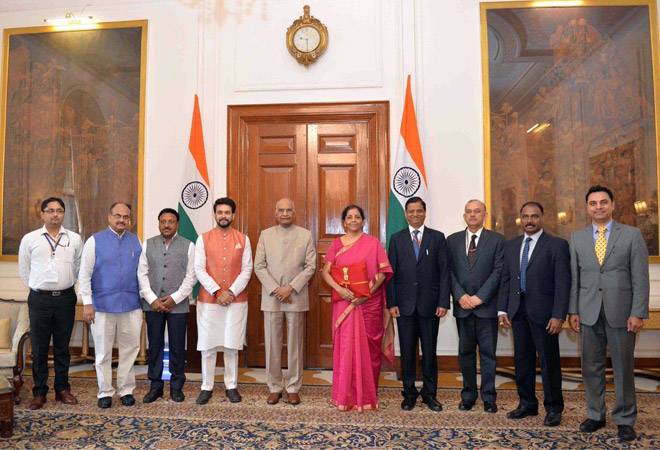 Nirmala Sitharaman with her red-cloth bag, along with President Kovind and ministers before presenting the Union Budget 2019

Finance Minister Nirmala Sitharaman on Saturday said carrying a red-cloth bag instead of a leather suitcase on the budget day was an indication that the Narendra Modi government does not indulge in a culture of "exchanging suitcases". On her maiden visit to Chennai after assuming office, she addressed members of the Nagarathar Chambers of Commerce as part of their International Business Conference, here. In her speech, she heaped praises on the Nagarathar community for their business practices and said it became news that she was not carrying a leather suitcase on budget day.

Ahead of presenting the budget on July 5, Sitharaman carried a red-coloured cloth bag instead of a leather suitcase which went viral on various social media platforms.

"It became news that a leather suitcase was not carried. There is nothing in that ... It is an indication. It is a small message. Whenever I think of a suitcase, some other thoughts come up in my mind. Our government does not indulge in a culture of exchanging suitcases," she said amid huge applause from the audience. "It was because of these reasons a suitcase was not carried. In this government, there is no necessity to carry a suitcase. In order to ensure transparency, this government floats tender system", she said.

"I took that bag just like carrying a file (before presenting the budget). It also became a controversy that I chose not to carry a suitcase because it was made of leather. No, I did not think that much Sir," she said.

Union Finance Minister Nirmala Sitharaman in Chennai: For #Budget2019, I didn't carry a suitcase. We aren't a suitcase-carrying govt as suitcase also denotes something else, suitcase-taking, suitcase-giving. Modi ji's govt is not suitcase govt. pic.twitter.com/w6V4e2Gp3t

Noting that a business is run successfully when entrepreneurs possess necessary skills, she said business practices that existed 15 years ago were not present today. "MBAs are adapting to the Indian context, which is good. But I still find there is a gap. A farmer can make good produce from his agricultural land, but he may not have the marketing skills to make good business of his produce," she said.

Observing that the budget had given much importance to startups, she said when the government was ready to support entrepreneurs, it was also looking at them for imparting their skills.

"That is a valuable contribution. From the government of India point of view, India will grow only when youngsters and businesses are given the opportunity to grow. That is the main message," she said.

Referring to the proposed hike in the surcharge on income tax paid by super-rich individuals, Sitharaman said, "India is at a cusp where we want to eliminate poverty. We want to move towards a better India where everybody gets opportunities".

In her maiden budget speech, Sitharaman proposed to hike the surcharge on income tax paid by super-rich individuals.

While the Finance Minister appreciated India Inc. for being wealth and job creators, she said more tax was levied on the super-rich to share the burden of the government.

"One should not think that such a tax was introduced without giving a thought... We are not asking you not to do any business. We are just asking you to pay more," she said.