The repo rate cut coupled with the MPC's decision to change the policy stance to accommodative means that those shopping around for home loans, car loans et al may land a cheaper deal soon RBI Monetary Policy Meet: The reverse repo rate has also been adjusted to 5.50 per cent.

RBI Monetary Policy Committee Meet: The six-member monetary policy committee (MPC), headed by RBI Governor Shaktikanta Das, has decided to reduce key repo rate by 25 basis points to 5.75 per cent from 6.0 per cent with immediate effect. The reverse repo rate under the LAF (liquidity adjustment facility) has been adjusted to 5.50 per cent, and the marginal standing facility (MSF) rate and the bank rate to 6.0 per cent. The RBI had retained its "neutral" stance after the rate cut in April but now it has changed its stance to "accommodative". This will be more comforting for the market than just a rate cut, especially in light of the slowdown.

Repo rate is the interest rate at which the RBI lends money to banks. When the cost of borrowing goes down for banks, they are able to lower their respective marginal cost of funds based lending rate (MCLR), which directly impacts your loans. "These decisions are in consonance with the objective of achieving the medium-term target for consumer price index (CPI) inflation of 4 per cent within a band of +/-2 per cent, while supporting  growth," RBI said in a statement. Speculation was rife that a bigger 35 bps or even 50 bps rate cut might be announced. The last time the MPC moved this quickly to lower rates was reportedly in 2013 to revive the moribund economy from growth rates that had slipped to a decade low.

With this cut, the repo rate has slipped to its lowest level since July 2010. The six-member MPC unanimously voted for the rate cut by 25 basis points and the stance change in its policy. RBI Governor Shaktikanta Das said the apex bank would take all the necessary steps to ensure adequate liquidity in the system.

Additionally, the RBI said that it has decided to do away with charges levied on RTGS and NEFT transactions, banks will be required to pass this benefit to their customers.

The RBI has also decided to set up a committee involving all stakeholders, under the chairmanship of CEO Indian Banks' Association (IBA), to examine the entire gamut of ATM charges and fees. Committee to submit its recommendations within two months of its first meeting. 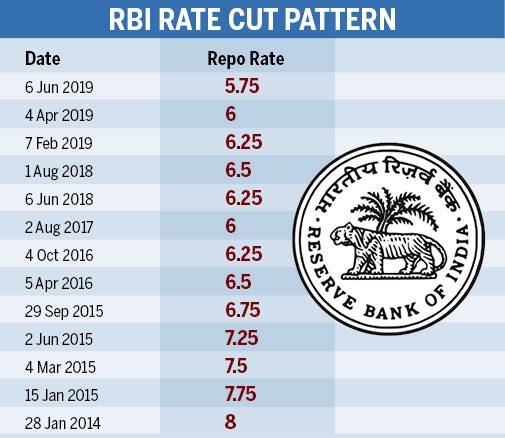 Moreover, the RBI governor said the apex bank expected the government to be fiscally prudent. He also said the RBI would issue revised February-12 circular on NPAs in the next three-four days.

"The headline inflation trajectory remains below the target mandated to the MPC even after taking into account the expected transmission of the past two policy rate cuts. Hence, there is scope for the MPC to accommodate growth concerns by supporting efforts to boost aggregate demand, and in particular, reinvigorate private investment activity, while remaining consistent with its flexible inflation targeting mandate," said the apex bank.