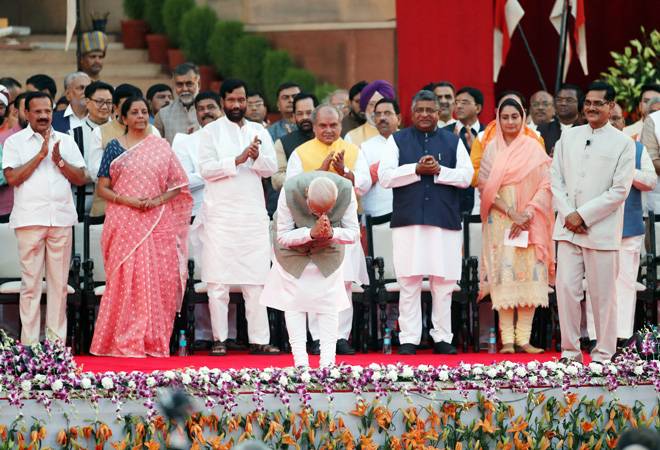 Narendra Modi took the oath of office and secrecy as the Prime Minister of India for a second term. President Ram Nath Kovind administered the oaths to PM Modi and his new Council of Ministers in a grand event held at the forecourt of Rashtrapati Bhavan on Thursday.

Dressed in a white kurta-payjama and a grey waistcoat, PM Modi took oath at around 7:05 pm in the presence of nearly 8,000 people. Rajnath Singh took to the dais to take oath. The crowd erupted in cheer as Amit Shah came to the stage next to take the oath for his first stint as a Union Minister.

Former Foreign Secretary Subrahmanyam Jaishankar also took oath as a minister of the new Modi Cabinet. Ramesh Pokhriyal Nishank came next, followed by Arjun Munda. The crowd once again cheered as Smriti Irani came forth to take her oath as a Cabinet Minister.

Apart from the leaders of BIMSTEC countries, including Bangladesh, Myanmar, Sri Lanka, Thailand, Nepal and Bhutan, heads of the states from Kyrgyzstan and Mauritius graced the ceremony touted as the biggest ever event that to be held at Rashtrapati Bhavan. The leaders from opposition parties, chief ministers of different states, ambassadors, diplomats and celebrities from Bollywood also attended the event.

After the swaring-in ceremony, the guests were treated with high tea and snacks including samosas, paneer items and sweets. President Ram Nath Kovind also hosted a dinner -- with both vegetarian and non-vegetarian options -- for the foreign leaders. The dinner was attended by Prime Minister Modi and other top leaders of the country.

ALSO READ:Modi 2.0: Who will get what ministry in NDA's new Cabinet