PM Modi says while Bihar has a 'double-engine ki sarkar', there are two 'yuvaraj' of whom one is from 'jungle raj'; he says first phase of voting has indicated huge gains for NDA 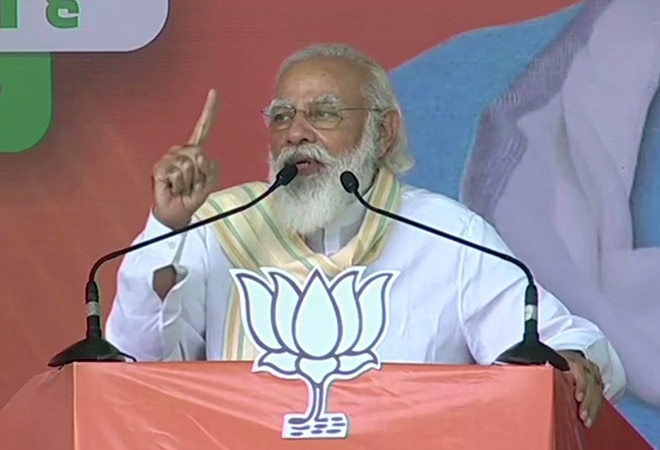 Prime Minister Narendra Modi, during one of the four rallies scheduled for Sunday in Chapra district of Bihar, said after the first phase of voting in Bihar, it is clear that Nitish Kumar is all set to form a government. He said the first phase of voting has indicated huge gains for NDA. "This has left opponents frustrated," he said, adding he was sure that people's vote in favour of BJP-JD (U) alliance will save Bihar from getting 'bimaar'. Political pundits proven wrong in the first phase of Bihar polls, which saw large voter turnout despite COVID-19, he said.

Appreciating the Nitish government in Bihar and attacking the Congress-RJD alliance, PM Modi said while Bihar has a 'double-engine ki sarkar', there are two 'yuvaraj' of whom one is from 'jungle raj'. "NDA defeated "double-double yuvraj" in UP polls; the "double-double yuvraj" will meet the same fate in Bihar," he said, in a swipe at Congress leader Rahul Gandhi and RJD chief Tejashwi Yadav.

He said the BJP-led government at the Centre has ensured free grains for poor till Chhath puja. "No woman should worry about how she will celebrate Chhath puja," he said while counting the government's achievements.

As per the PM's itinerary for today, from Chapra he will go to Samastipur to address a public meeting in Housing Board ground, then at Gandhi maidan in Motihari and will end the campaign trip with a rally in Bagaha. So far, PM Modi has addressed six election rallies in Bihar. In total, he will be addressing 16 rallies.