Onion nears Rs 80 per kg in Delhi, Mumbai; prices likely to remain high for a month

Onion was being sold for Rs 75-80 per kg in Mumbai and Delhi retail markets on Tuesday morning. Whereas, the staple's prices in Bengaluru, Chennai and Dehradun touched Rs 60 per kg. In Hyderabad, onions were selling at Rs 41-46 per kg. 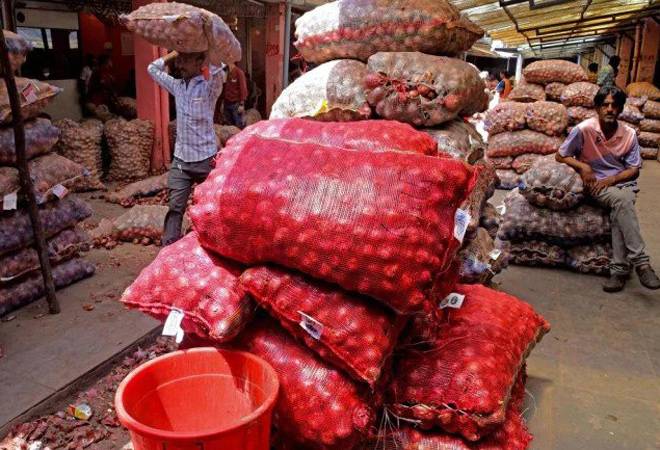 The prices of onions continue to rise sharply across metros in India owing to flooding in various states that grow this staple. The rates have soared up to Rs 80 per kg in some parts of the country.

The onion prices in the past few days have witnessed an increase of around Rs 30-40 per kg at many places and the poor supply has forced the wholesale rates upward to a four-year high.

Meanwhile, the kitchen staple was being sold for Rs 75-80 per kg in Mumbai and Delhi retail markets on Tuesday morning. Whereas, the onion prices in Bengaluru, Chennai and Dehradun touched Rs 60 per kg. In Hyderabad, they were selling at Rs 41-46 per kg.

NO RELIEF FOR A MONTH

Heavy monsoon followed by flooding in many states has damaged crops which have caused a sudden spurt in onion prices. The condition is likely to stay the same for at least a month.

"Due to the loss of onion crop for three consecutive years, farmers had thrown the crops on roads last year. Two farmers had committed suicide in Nashik. Now, the farmers say that the price is compensation for the three year-loss," Hiraman Pardeshi, an onion trader in Nashik, the hub of onion production, told India Today TV.

"Last year farmers grew only half of the usual production. The heatwave in May and subsequent heavy rains this year left only 50 per cent of the crop," he added.

Pardeshi also criticised the government over its inaction to arrest the price rise. He said that the administration did not do anything last year when the farmer threw their crops. But, "now that the prices have increased everyone is blaming the farmers."

He added that the consumers will have to cope with the rising onion prices till November.

The Union government is taking numerous steps to halt the rising onion prices in Delhi and other states. It has taken the decision to release more onions from its buffer stocks via agencies like NAFED and National Cooperative ConsumersFederation of India Limited (NCCF).

The government is also resorting to limiting onion export and has set the minimum export price (MEP) of onion at $850 (Free on Board) FOB per tonne.

An onion exporter in Nasik which is India's major onion producing areas said that "A higher MEP means export would be impossible."

The government had withdrawn the incentives on onion exports under the Merchandise Export from India Schemes (MEIS) in June this year after the staple prices jacked up steeply in the country.

The state governments are directed to advance supply in their states from federally held buffer stocks of 56,000 tonnes of onion. 16,000 tonnes have been released so far where in 200 tonnes is being offloaded in Delhi every day.

Meanwhile, Delhi Chief Minister Arvind Kejriwal Monday said that his government will offer onions at Rs 24 per kg across the city through mobile vans.

Also Read:Tomato prices spike from Rs 30 to Rs 80 per kg in Delhi; here's why