State-owned oil firms in a notification on Sunday said that petrol and diesel rates have been hiked by 19 paise per litre each in Delhi due to rising international oil prices, renewing calls for the government to cut excise tax rates on the fuels. 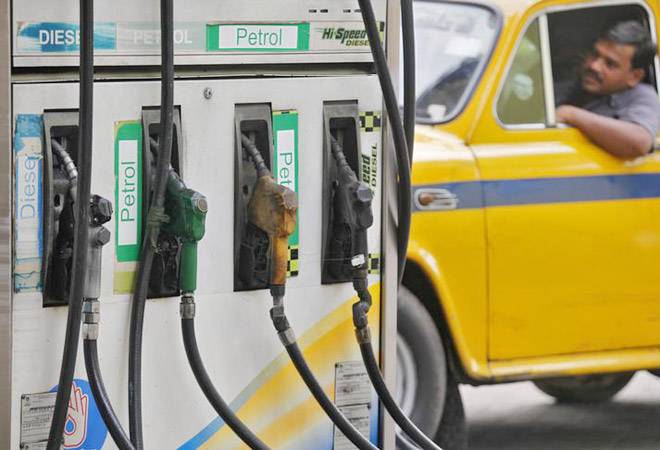 Petrol price surged to a 55-month high yet again on Sunday to touch Rs 74.40 a litre in the national capital, while diesel price soared to a new all-time high of Rs 65.65, just three days after prices of both the fuels touched record levels.

State-owned oil firms said in a notification on Sunday that petrol and diesel rates have been hiked by 19 paise per litre each in Delhi due to rising international oil prices, renewing calls for the government to cut excise tax rates on the fuels.

On Friday, petrol price in Delhi surged to Rs 74.08 a litre, the highest till then since September 2013. Diesel price also went up by 4 paise to Rs 65.31, according to data from Indian Oil Corporation.

The last time petrol rate was higher was in September 2013, when it touched Rs 76.06. Fuel prices surged across the country as well on Sunday.

India has the highest retail prices of petrol and diesel among South Asian nations as taxes account for half of the pump rates.

The government raised the excise duty on fuel nine times between November 2014 and January 2016 to shore up finances as global oil prices declined, but then cut the tax by Rs 2 a litre in October 2017.

On April 11, Prime Minister Narendra Modi called on oil-producing countries to ensure "reasonable and responsible pricing" that will make energy accessible and affordable to all.

A surge in global crude oil prices, curbs on production by the Organisation of the Petroleum Exporting Countries and high demand are also considered the reasons for the increasing fuel prices.

Earlier this year, oil ministry sought a reduction in excise duty on petrol and diesel to cushion the impact of rising international oil rates.

However, the finance ministry has not reduced the rates. While retail inflation has been cooling down, the hike in fuel rates is likely to reverse that trend through a cost-push impact. It will affect inflation directly because commuters will have to pay more for petrol.

There will also be an indirect impact as cost of transporting goods will go up because of higher diesel prices.

The surge in petrol prices also comes at a time when the Reserve Bank of India has kept key lending rates unchanged for the fourth time in its bimonthly monetary policy review meeting held on April 4-5.

The decision of the first monetary policy meeting of the new fiscal year was along widely expected lines given the concerns over rising crude oil price, market volatility and inflation above its 4% target.