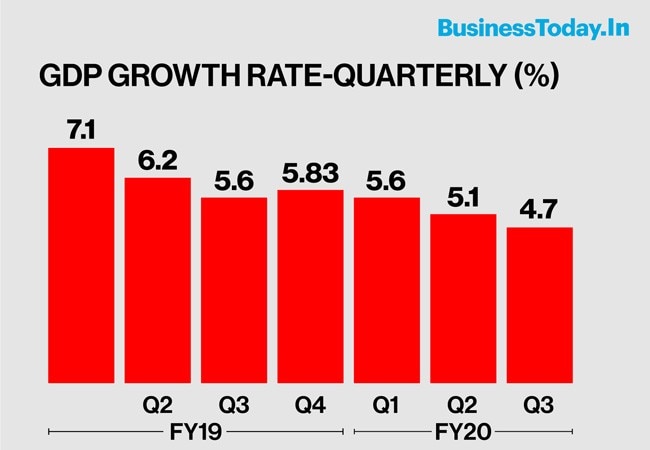 It initially appeared to be an end of slowdown as India reported 4.7 per cent increase in Gross Domestic Product (GDP) for December quarter on Friday. But, closer look at data suggests otherwise.

As per the old GDP numbers, 4.7 per cent would have been a growth over the previous quarter's 4.5 per cent. However, that was not to be. Quarterly GDP growth this fiscal now reads 5.6 per cent, 5.1 per cent and 4.7 per cent, reaffirming that India's economic deceleration continues unabated.

As per revised estimates, India's GDP growth rate has fallen for third quarter in a row to its lowest level in seven years. Analysts were expecting the Indian economy to turn around following uptick in rural demand, government expenditure and private consumption. But it seems India will have to wait longer for some good news on the economic front.

This dents India's ambitions to become a $5 trillion economy by 2024. According to estimates by NITI Aayog, India needs to grow at 11.5 per cent annually in nominal terms, or 7.5 per cent in real terms over the next 10 years to realise this dream.

And the path ahead looks far from rosy. The deadly coronavirus outbreak is expected to take its toll on Indian economy, which is expected to show in GDP figures for the fourth quarter of current fiscal. The crisis, which began in China, has already crippled global supply chains. It is expected to have a major impact on several Indian industries, including pharmaceuticals, electronics, automobile, consumer durables, among others.

Meanwhile, even as GDP growth reached its lowest in 26 quarters, government believes things will change from here on. "We have already bottomed out," said Economic Affairs Secretary Atanu Chakraborty while talking to reporters after the NSO released its data.

On the impact of coronavirus crisis on the global economy, he said "it is an unfolding story". Notably, his statement came hours after fear over the deadly virus wiped $5 trillion from global markets. BSE Sensex clocked its second-biggest fall ever, closing 1,448 points lower at 38,297 on Friday. Meanwhile, Nifty lost 431 points to 11,201 today.

Rs 2,000 notes to stay or not? Here's what Nirmala Sitharaman has to say