The Defence Minister also performed 'Shashtra Puja' ceremony (or weapons worship), as part of Dussehra celebrations. He emblazoned the new aircraft with 'Om tilak' and laid flowers and a coconut before he took off for a sortie 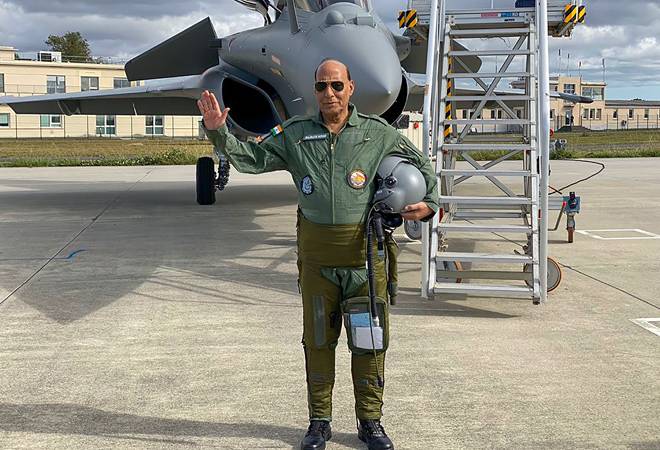 Defence Minister Rajnath Singh on Tuesday received the first Rafale fighter jet from France on behalf of the Indian Air Force (IAF). Singh, who attended the handover ceremony of the first Rafale fighter jet at aircraft maker Dassault Aviation facility in Merignac, southwestern France, called it as "historic" moment and said that it would boost strategic ties between India and France, reported news agency PTI.

Ready for take off in the newly inducted Rafale pic.twitter.com/iNcsx3KUdO

The Defence Minister also performed 'Shashtra Puja' ceremony (or weapons worship), as part of Dussehra celebrations. He emblazoned the new aircraft with 'Om tilak' and laid flowers and a coconut before he took off for a sortie. He was joined by senior representatives of Indian armed forces to mark the induction ceremony.

Speaking on the occasion, Singh said, "Our Air Force is the fourth-largest in the world and I believe that the Rafale Medium Multi-Role Combat Aircraft will make us even stronger and will give a boost to India's air dominance exponentially to ensure peace and security in the region."

"I have been told that the French word Rafale means andhi in Hindi or gust of wind. I am sure that the aircraft will live up to its name," PTI quoted him as saying.

"This is a historic and landmark day for the Indian Armed forces, which reflects the depth of strategic partnership between India and France. Today marks Vijayadashami the victory of good over evil as also the 87th Indian Air Force Day. And therefore a symbolic day in so many ways," he added.

India had ordered 36 Rafale fighter jets from France in a deal worth Rs 59,000 crore in September 2016. The Rafale is a twin-jet fighter aircraft capable of operating from both an aircraft carrier and a shore base. The manufacturers describe it as a fully versatile aircraft, which can carry out all combat aviation missions to achieve air superiority and air defence, close air support, in-depth strikes, reconnaissance, anti-ship strikes and nuclear deterrence.

Defence Minister Rajnath Singh, who reached France's capital city of Paris for a three-day visit on Monday, will tomorrow address CEOs representing leading French defence industry enterprises, and will invite them to take part in the DefExpo to be held in Lucknow from February 5 to 8 in 2020.