Recession Reality Check: Not recession yet but Indian economy isn't far from it either

All the key economic indicators have been on a downward swing for quite some time. If this slide is not checked India may slip into recession sooner than later. In this first part of a two-part series, the article looks at what the major economic indicators are telling about the state of Indian economy 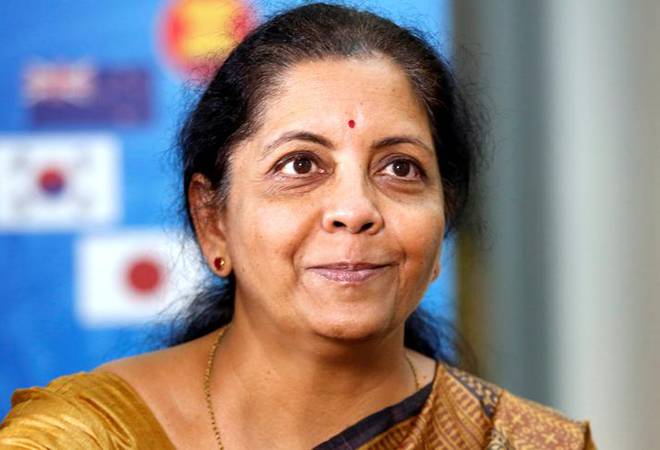 Finance Minister Nirmala Sitharaman made a dramatic statement at the Rajya Sabha on November 27: If you are looking at the economy with a discerning view, you see that growth may have come down but it is not a recession yet, it will not be a recession ever.

Two days later, the National Statistical Office (NSO) released the GDP estimates for the Q2 of FY20 showing a sixth straight fall in the quarterly GDP growth - from 8.1% in Q4 of FY18 to 4.5% for Q2 FY20 - as shown in the graph below. How the world measures recession

India does not have its own norms or standards for identifying and declaring recession, says Pronab Sen, economist and statistician who supervised the finalisation of the 2011-12 GDP series as chairman of the National Statistical Commission (NSC).

The globally accepted definition of recession comes from the US' National Bureau of Economic Research (NBER) which says, "A recession is a significant decline in economic activity spread across the economy, lasting more than a few months, normally visible in real GDP, real income, employment, industrial production, and wholesale-retail sales."

The UK and the European Union accept the following definition: The commonly accepted definition of a recession in the UK is two or more consecutive quarters (a period of three months) of contraction in national GDP.

The International Monetary Fund (IMF) evolved its own measure during 2008-09 global financial melt-down in its World Economic Outlook - April 2009: Crisis and Recovery the approach of which is to look at decline indicators such as "real GDP per capita, industrial production, trade, capital flows, oil consumption and unemployment".

Sen says the words 'decline' or 'contraction' used in the above definitions stand for "negative" growth rate. Since India's quarterly growth is a "plus" 4.5%, the Indian economy is not in a recession, he declares.

How does the Indian economy look if all the economic indicators mentioned in connection with recession are examined?

Here is a reality check:

(a) Growth in per capita income and product

What does growth in per capita GDP and per capita gross and net national income (GNI & NNI) look like? India does not publish quarterly but annual growth rates for these indicators and here is what those data show.

All three indicators have steadily fallen since FY16 for which data is readily available, except for the per capita GNI which went up in FY18 before going down again. (b) Growth in private consumption (b1) Growth in oil consumption

Consumption of petroleum products - a high-frequency data released on a monthly basis by the Ministry of Petroleum and Natural Gas - is a good measure of economy too. Here is what the quarterly growth in volume (taking average of three months of a quarter as the quarterly value and then calculating growth rate from the corresponding quarter of the previous year) looks. 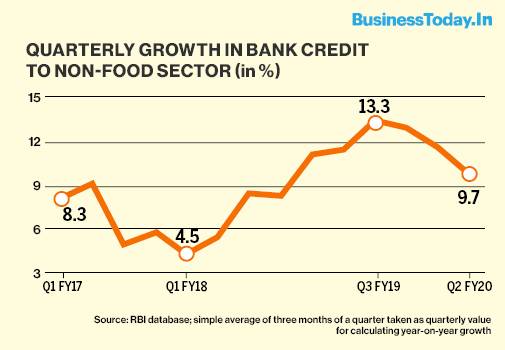 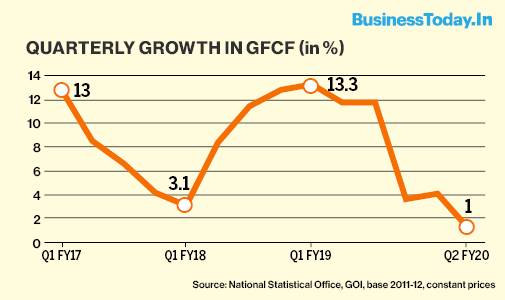 The Index of Industrial Production (IIP), which measures industrial production - mining and quarrying having a weightage of 14.4%, manufacturing 77.6% and electricity 7.9% in the IIP under 2011-12 series - is another high frequency data available on a monthly basis.

The following graph shows quarterly growth rate in the IIP General Index (which includes all the components of industry) but using a simple moving average method in which the average of three months in a quarter is taken as the quarterly value and mapping growth in each quarter without year-on-year calculation.

The growth rate has fallen for several quarters, but showed signs of improvement in Q2 of FY20. The monthly growth rate, however, presents a starker picture. 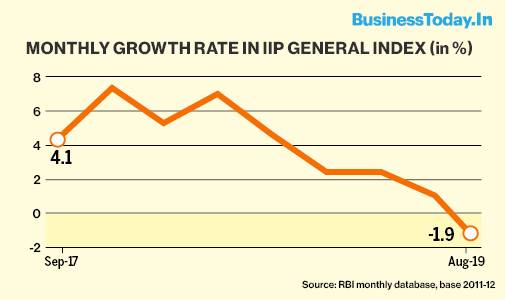 Electricity generation (weightage of 7.99% in IIP in 2011-12 series) is taken as a good indicator of the economic performance. This is also high-frequency data, available on a monthly basis.

This is what the latest Department for Promotion of Industry & Internal Trade (DPIIT)'s October 2019 statement shows. It has gone down to (minus) 12.4% in October 2019 - steadily falling since June 2019 when it registered a high growth of 8.6%. This is an alarming situation, reflecting poor economic activities. 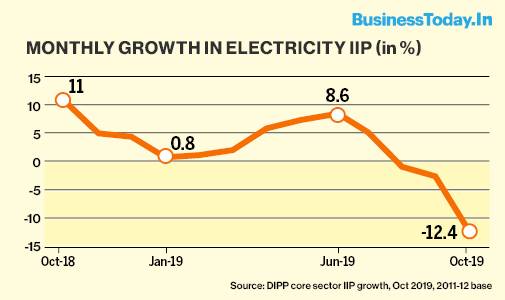 The only significant macroeconomic indicator showing a positive trend is unemployment.

The Mumbai-based business information company CMIE carries out monthly survey of the state of employment (with a sample size of over 1.5 lakh households - bigger than the NSSO sample size) which shows, when plotted for quarterly movement (simple moving average for a quarter), the unemployment rate is growing since Q2 of FY18, reaching 7.6% in Q2 of FY20. 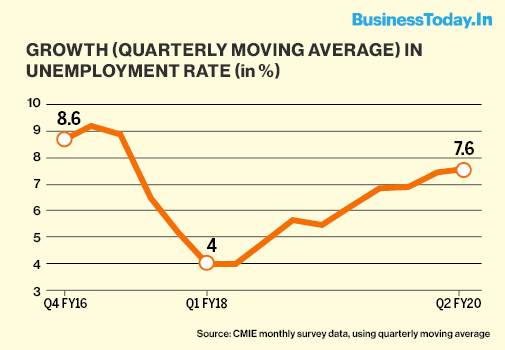 Latest monthly data of the CMIE shows an unemployment rate of 7.48% in November - down from 8.45% in October 2019. But the labour force participation rate (LFPR) - which reflects how many of the labour force (those either working or looking for work) are employed - fell to a new low of just 42.37%.

Not far from recession

Growth in all the major economic indicators shown in the earlier paragraphs clearly indicates that India is not yet in a recession but the rapid downwards movement is a warning for the policy makers: If the decline continues at this rate the days of recession are not far away - when the quarterly GDP growth actually hits the negative zone.

But this is only a part of the story of India's economy.