Co-operative sector banks, particularly the urban co-operative banks (UCBs), are falling apart slowly but surely with mounting stressed assets, the full extent of which may not be known 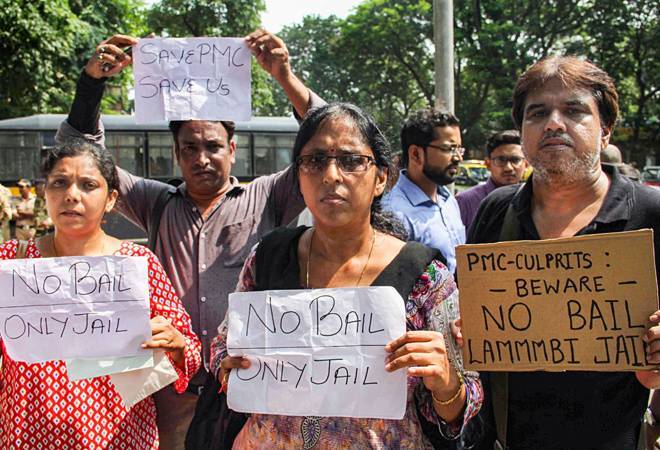 The crisis of the non-performing assets (NPAs) is not restricted to the scheduled commercial banks (SCBs) alone. An equally alarming situation has emerged in the co-operative sector banks, particularly the urban co-operative banks (UCBs) like the scam-hit Punjab and Maharashtra Cooperative Bank (PMC).

The RBI Governor may have shown urgency in auctioning the assets of Housing Development & Infrastructure Ltd (HDIL) attached in the PMC case - PMC had 73% loan exposure to it by holding a meeting with the ED and Mumbai police officials last Monday (November 18), the crisis runs wider.

According to the RBI's 2018-19 annual report, 26 UCBs were put under withdrawal restrictions and 46 were found with "negative net worth" (liabilities more than assets) at the end of FY19.

Growing GNPAs in SCBs and UCBs

The RBI's latest 'Report on Trends and Progress of Banking in India 2017-18', presents a comparative graph of GNPAs in the SCBs and UCBs which shows both rising steadily in the past few years. This report further says in FY18, the asset quality of UCBs improved, although overall profitability moderated. Among the rural co-operative segments, only the state co-operative banks (StCBs) improved their NPA ratios and profitability.

The RBI database shows the GNPA ratios - GNPA to gross advances - of all these co-operative banks since FY10. The UCBs, though constitute only 2% in number, they dominate the sector in financial powers (44% of deposits and 31% advances in FY17) as could be seen from a comparative analysis by a 2019 SBI research. A noticeable feature in this graph is the collapse of the long-term agriculture and rural credit structures - the SCARDBs and PCARDBs - reflecting a deep crisis in the rural economy.

The problem with UCBs is not new.

Satish Marathe, director in the RBI's Central Board and a veteran of the co-operative sector, points to the Harshad Mehta-and-Hiten Dalal-led stock market scam of 1991-92 which sank the Mumbai-based Metropolitan Co-operative Bank (MCB). The MCB was liquidated in June 1992. Thereafter came the Ketan Parekh-led stock market scam of 2001 which tanked the Ahmedabad-based Madhavpura Mercantile Cooperative Bank (MMCB). After a 10-year scheme (Scheme of Reconstruction) to revive MMCB failed, the RBI liquidated it.

The PMC is the third in line which owes its trouble to Rakesh Wadhawan and his son Sarang-run HDIL which is facing the insolvency proceedings.

The following graph shows how UCBs are falling out of the map year after year since FY04 - 375 in all or at a rate of more than two every month for the past 14 years. Several committees - from Satish Marathe Committee of 1991 to R Gandhi Committee of 2015 - have diagnosed the problems with the UCBs and offered solutions aplenty and yet, the PMC scam could not be prevented.

Dual regulation is considered to be one of the biggest reasons for regulatory failure.

The UCBs are governed by both state co-operative bodies and the RBI - state governments' Registrar of Co-operative Societies (RCS) regulates administrative aspects (including elections) through various state laws and the RBI the banking aspect through the Banking Regulation Act of 1949 (extended to co-operative banks in 1966). That is because the co-operative bodies have a distinct character. These are not just financial institutions but have social responsibilities and obligations too.

The RBI had pursued an active policy to promote UCBs during 1993-2004, which led to a "sharp rise" in their numbers, notwithstanding the MCB episode, but after the MMCB happened, it stopped on the track. Finding "signs of incipient financial fragilities in the sector", it went for merger/amalgamation of weak but viable UCBs and closure of unviable ones in 2005 which led to a steady fall in their numbers as the graph above shows.

An overwhelming response of banking experts to improve the functioning of UCBs has been to end dual regulations and handing over their complete control to the RBI. But this has faced resistance.

When in November 2018, the RBI issued guidelines for allowing voluntary transition of UCBs to small finance banks (SFBs), which are under complete control of the RBI, it found little traction.

The next big idea of the RBI is to establish an Umbrella Organisation (UO) for UCBs - in line with the Netherland's successful Rabobank. "Regulatory approval has been accorded to the National Federation of Urban Cooperative Banks and Credit Societies Ltd (NAFCUB) for setting up the UO as a non-deposit taking NBFC (NBFC-ND)", announced the RBI's 2018-19 annual report.

First mooted by an RBI working group (2006), UO found approval from the Malegam Committee (2011) and R Gandhi Committee (2015) with some caveats. The latter, for example, said "a prerequisite for such a successful umbrella organisation is inherently sound and well-run member institutions".

The idea of UO is, as the RBI's annual report of 2018-19 says: (a) UO would provide liquidity and capital support (UCBs can't raise capital through public issue, issue shares at premium or access to the RBI's liquidity support) (b) set up IT infrastructure and (c) offer fund management and other consultancy services and contribute to the capacity building in UCBs. That is, address the shortcomings - from fundraising to oversight.

How would it address the governance issue that the R Gandhi Committee points at remains to be seen.

Improvement in governance holds the key

Investigations into the PMC scam have shown gross financial mismanagement and a complete breakdown of internal control mechanisms. Violating banking norms, the PMC had 73% loan exposure to the HDIL, which was masked through 21,000 fictitious accounts until a whistleblower blew the cover.

Marathe says UCBs are relatively smaller financial institutions which lack professionalism, expertise and sound internal check-and-balance systems. He suggests "separation of ownership from management" as key to addressing the problem, along with capacity building to overcome knowledge and experience gaps and use of technology for better checks and balances.

The R Gandhi Committee of 2015 refers to this study and says: "...a study was conducted by RBI on co-operativeness of co-operative banks which found that the co-operative character of the banks is on a decline as evident from low attendance in AGMs, restrictive practices in admitting new members, low voting turnouts for elections to new managements, re-election of the same management or their family members, unanimous elections and lack of meaningful discussions in AGMs. Thus the UCBs are losing their co-operative character..."

When asked why India has failed to set up an effective mechanism to run UCBs since both the problems and solutions are well understood, Karuppasamy says the co-operative are political institutions and it needs the political will to solve their problems, which is lacking.