Republic Day 2019: Greeting the nation on the eve of Republic Day, President Ramnath Kovind on Friday said that the Republic Day reaffirm our commitment to liberty, fraternity and equality across our society. 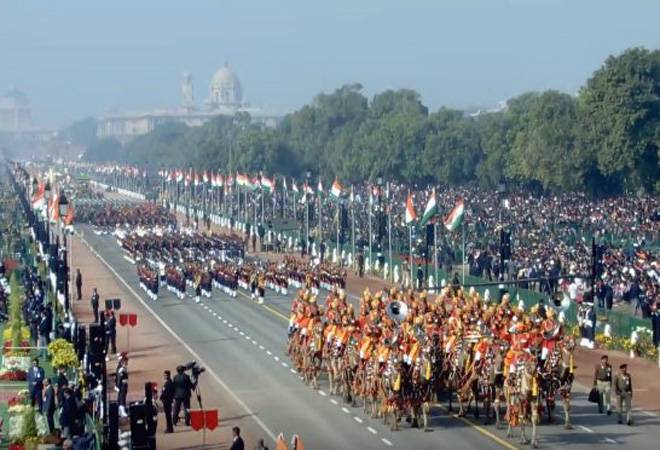 Republic Day 2019: Happy Republic Day, readers! The country is celebrating its 70th Republic Day today - a day that honours the Constitution of India. Today, over 1.2 billion Indians are celebrating the country's military might across land, seas and air. Several states are also showcasing tableaus depicting their unique heritage. To mark the occasion, South African President Cyril Ramaphosa has been invited as the Chief Guest for this Republic Day. Greeting the nation on the eve of Republic Day, President Ramnath Kovind on Friday said that the Republic Day "reaffirm our commitment to liberty, fraternity and equality across our society". He added India is at a key juncture, and decisions and actions taken today will shape its future course.

Adequate security arrangement has been put in place to ensure no untoward incident happens on the Republic Day. NSG commandos, including women commandos, mobile hit teams, anti-aircraft guns, snipers and sharpshooters have been deployed at strategic points to keep a close watch on the 8-km-long Republic Day parade route from Rajpath to the Red Fort in central Delhi. The Delhi Police's parakram vans are patrolling round-the-clock on all strategic locations to ensure smooth functioning of the Republic Day parade.

11:31 am: With this the 70th Republic Day celebrations come to an end.

11:19 am: Thirty-three Dredevils on nine bikes! The pyramid formation has taken everyone by surprise.

11:16 am: Yoga on the go! Gravity-defying stunts on bikes are on display by the Daredevils.

11:14 am: 26 children including 6 girls and 20 boys have been honoured with Pradhan Mantri Rashtriya Bal Puruskar 2019.

#republicdayindia 26 children including 6 girls and 20 boys have been honoured with Pradhan Mantri Rashtriya Bal Puruskar 2019 pic.twitter.com/8xxrTEM2OX

10:56 am: Tableau of Karnataka is based on the 39th session of the Indian National Congress held in Belagavi in 1924, which was presided over by Mahatma Gandhi.

#republicdayindia Tableau of Karnataka is based on the 39th session of the Indian National Congress held in Belagavi in 1924, which was presided over by Mahatma Gandhi pic.twitter.com/tWsztHczoY

10:54 am:  Tableau of Punjab is based on the theme of Jallianwala Bagh massacre.

#republicdayindia : Tableau of Punjab is based on the theme of Jallianwala Bagh massacre pic.twitter.com/qGyOkInRGc

10:46 am: Tableaux of Andaman and Nicobar, Maharashtra and Sikkim.

10:30 am: Nari Shakti! The all-women contingent of Assam Rifles followed by the marching band arrives.

The Veterans tableau-2019, it showcases the theme, 'Veterans: Accelerators in Nation's Growth'. #republicdayindiapic.twitter.com/4vUsUyVzd6

The government announced names of 112 persons, who have been selected for Padma Vibhushan, Padma Bhushan and Padma Shri in the fields of art, social work, public affairs, science and engineering, trade and industry, medicine, literature and education, sports, civil service etc.

Visuals of the T-90 (Bhishma), the main battle tank of the Indian Army, commanded by Captain Navneet Eric of 45 Cavalry #RepublicDay2019pic.twitter.com/NjGHg2oMDS

Delhi: Lance Naik Nazir Ahmed Wani, who lost his life while killing 6 terrorists in an operation in Kashmir, awarded the Ashok Chakra. Award was received by his wife and mother #RepublicDay2019pic.twitter.com/3bjYdiwTLp

9:50 am: PM Modi's cavalcade, President Kovind's cavalcade on their way to Rajpath.

9:42 am: PM Modi salutes the martyrs at Amar Jawan Jyoti.

9:34 am: Search giant Google on Saturday dedicated a special doodle to mark India's 70th Republic Day , which captured the country's architectural and cultural legacy as well as its rich bio-diversity. The doodle with a 3D impression depicts the iconic facade of the grand Rashtrapati Bhavan in the backdrop, flanked by trees, reflecting the flora and fauna that resides on its sprawling campus. 9:25 am: UP Chief Minister Yogi Adityanath present at Republic Day 2019 celebrations in Lucknow.

9:22 am: Union Ministers Rajnath Singh and Nitin Gadkari unfurl the Tricolour at their residences.

8:59 am: Gita Mehta, Odisha Chief Minister Naveen Patnaik's sister, who was been conferred with the Padma Shri award in the field of literature and education, has refused to accept the Padmi Shri.

Mehta said, "I am deeply honoured that the Government of India should think me worthy of a Padma Shri but with great regret I feel I must decline as there is a general election looming and the timing of the award might be misconstrued, causing embarrassment both to the Government and myself, which I would much regret."

8: 53 am: This year's Republic Day will see several firsts, including the participation from Subhas Chandra Bose's Indian National Army veterans - all of them aged 90-100 years. The Railways is also showing its state-of-the-art indigenous Train 18, India's fastest train that runs at 180 kmph. Among missiles and artillery systems being showcased at the Republic Day parade include M777 American Ultra Light Howitzers, Main Battle Tax T-90 and indigenous Akash Weapon System.

8:51 am: PM Modi to pay tribute at the Amar Jawan Jyoti shortly.

Delhi: #RepublicDay2019 parade will begin at Rajpath at 9.50 am, prior to which Prime Minister Narendra Modi will pay tribute at the Amar Jawan Jyoti pic.twitter.com/ByzZ4nwZTs

8:49 am: Odisha Governor at the Bhubaneshwar Republic Day ceremony.

8:46 am: BJP Chief Amit Shah unfurls the Tricolour at the party office.

8:15 am: Crowd gathers at Delhi's Rajpath for the parade.

Crowds gather for the #RepublicDay2019 parade at Rajpath in Delhi. President of South Africa Cyril Ramaphosa is the chief guest at the parade today. pic.twitter.com/dZCOKSXTiY

8:09 am: The police arrested two suspected Jaish-e-Mohammad (JeM) members, who were planning to carry out terror strikes in the city during the 70th Republic Day celebrations. The arrested members of the JeM had identified Lajpat Nagar market, Haj Manzil, Turkman Gate, Paharganj, India Gate and the IGL gas pipeline in east Delhi as potential targets, police said.

8:08 am: SWAT women commandos, mobile hit teams, snipers are among the varied layers of security under which the national capital has been placed for the Republic Day celebrations. Elaborate measures, including deployment of anti-aircraft guns, were put in place to secure the airspace.

President @CyrilRamaphosa visits the Mahatma Gandhi Memorial in Delhi, India on the occasion of his State Visit at the invitation of Prime Minister Narendra Modi. The President took part in a wreath laying ceremony as India marks 150 years since the birth of Mahatma Gandhi. pic.twitter.com/nRA25TaYx3

Delhi: Visuals from Rajpath on the eve of #RepublicDay2019pic.twitter.com/sGVYd5VseR

7:15 am: The Prime Minister wishes the nation on Republic Day.

7:13 am: Former President Pranab Mukherjee, the late maestro Bhupen Hazarika and  the late social activist Nanaji Deshmukh were conferred the Bharat Ratna on the eve of Republic Day.

7:12 am: More than 3500 students gathered to create large portraits of freedom fighters Bhagat Singh, Rajguru and Sukhdev on the eve of Republic Day in Pune.

Maharashtra: More than 3500 students gathered to create large portraits of freedom fighters Bhagat Singh, Rajguru and Sukhdev on the eve of Republic Day in Pune. pic.twitter.com/RCYPUpcfrj

7:09 am: Metro service shall remain available at all stations during the Republic Day parade. However, boarding and de-boarding will not be allowed at Central Secretariat and Udyog Bhawan from 5 am till 12 pm, Lok Kalyan Marg (Race Course) and Patel Chowk from 8.45 am to 12 pm, Kumar said.

7:06 am: From 10 am on January 26, traffic on Tilak Marg, Bahadur Shah Zafar Marg and Subhash Marg will not be allowed on both flanks. Cross traffic will only be allowed depending on the movement of the parade, he added.

7:02 am: According to an advisory released by the Delhi Police, the Republic Day parade will start at 9.50 am from Vijay Chowk and proceed towards the Red Fort grounds through the Rajpath, India Gate, Tilak Marg, Bahadur Shah Zafar Marg and Netaji Subhash Marg.

7:01 am: The traffic police have deployed 3,000 personnel to manage route diversions and ensure a safe and secure passage for the visiting dignitaries.