The war of words ensued between Robert Vadra and Smriti Irani on the day Congress President Rahul Gandhi's family bastion Amethi is voting in the fifth phase of Lok Sabha Election 2019. 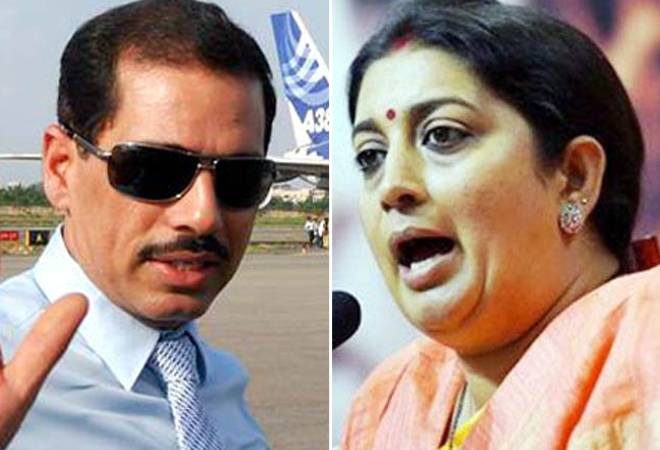 Robert Vadra Monday questioned Union Minister Smriti Irani on her degree/qualifications asking her to disclose the same. The businessman sneered at Irani asking her to focus on elections instead of "taking jibes" at him.

The war of words ensued between Vadra and Irani on the day Congress President Rahul Gandhi's family bastion Amethi is voting in the fifth phase of Lok Sabha Election 2019.

"Smriti Irani ji, wid due respect, pls conc on elections instead of taking jibes at me. India wants to knw abt ur deg/qualifications & underlying controversy with it. First, u clarify that&then point finger at others. Awaiting to c if u r qualified. No disclosure or reply means u r not," Vadra said in a Facebook post.

His remarks came as a rebuttal after Irani warned people of Amethi to protect their lands in the areas where Vadra would campaign. Her comment came over the development that he will be the star campaigner for the Congress party in the 2019 Lok Sabha election.

"I would only want this that, the areas where Shri Robert Vadra would want to go to do campaigning, the public in those areas beware and protect their lands," Irani told ANI.

The Union Minister also hit out at Rahul Gandhi on Twitter earlier Monday morning that he was "ensuring booth capturing" in Amethi Lok Sabha seat. Irani who is pitted against the Congress Chief in Amethi had tweeted a video where an old lady in the constituency was claiming to have been forced to vote for Congress by an officer-in-charge at the booth.

Also Read: Congress hits out at Smriti Irani over qualifications

The lady was seen as saying in the video that her hand was forcibly put on 'panja' (hand)- Congress' election symbol, although she wanted to press hit on 'kamal' button (lotus) which is the BJP's symbol.

The Union Minister had earlier targetted Gandhi alleging that he was "missing" from Amethi not caring enough for his voters in his constituency.

Amethi is one of the 51 Lok Sabha seats in seven states where polling is underway today. The constituency is also one of the most closely watched and the high-profile parliamentary seats in the country in the ongoing Lok Sabha election 2019. Gandhi had beaten Irani in the 2014 general elections by around 1 lakh votes.

Also Watch: What is the ground reality in Amethi and Rahul Gandhi's adopted village?