'Saved economy that was heading towards disaster 5 years ago,' says PM Modi

In the last 5 years, the country has strengthened itself in a major way and thus, we can strive and achieve targets such as the $5 trillion economy target, says Prime Minister Modi 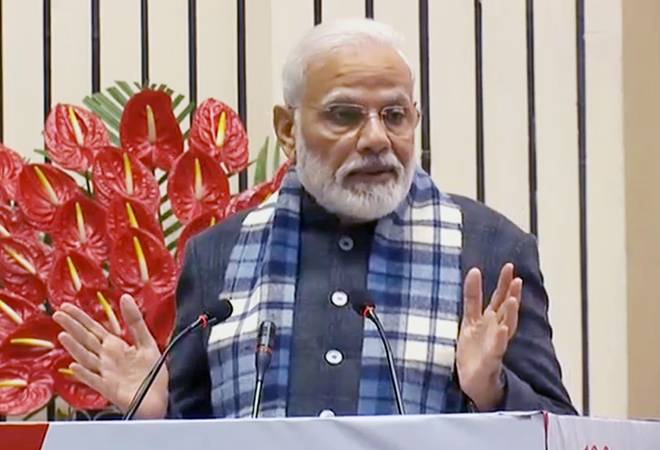 Prime Minister Narendra Modi on Friday said that his government has "saved" the Indian economy that was heading towards a disaster five-six years ago. Addressing the AGM of the Associated Chambers of Commerce and Industry of India (ASSOCHAM), PM said his government has not only stabilised the economy but also made efforts to bring discipline to it.

"Five-six years back our economy was heading towards disaster. Our government has not only stabilised it, but also made efforts to bring discipline to it. We have paid attention to fulfilling the decades old demands of the industry," Modi said in a speech at the inaugural session of 100 years of Assocham. The theme of the event is 'New India Aspiring for a $5-trillion economy'.

"In the last 5 years, the country has strengthened itself in a major way and thus, we can strive and achieve targets such as the $5 trillion economy target," Prime Minister said.

His comment comes at a time when India's GDP growth rate has slipped to six-year low of 4.5 per cent in July-September quarter.

Commenting on the government's vision of making India a $5 trillion economy, PM Modi said, "When I set the $5 trillion target, I was aware about the negative campaign against it. The $5 trillion target is not spontaneous. It is being debated for the last five years. In 2014, I set the target of making India open-defecation free and the country made efforts to achieve this. People's mobilisation and system modernisation are important for any programme to succeed."

Modi said that his government wants to formalise and modernise the Indian economy. "From providing measures to increase digital transactions to GST, and from Aadhar linked payments to DBT, we've tried to include such positive moves in our economy," he said.

"To bring transparency, efficiency, and accountability in the tax system, we're heading towards faceless tax administration, which will help administration as well," he added.

On ease of doing business, PM said that India ranked 142 out of 190 countries when he took over. 'In just three years, we have jumped to 63rd spot, which has become possible only because we do it for the country," he said.

PM Modi said the banking system in the country has become transparent and can empower the dream of India becoming a $5 trillion economy. He said that due to his government's efforts 13 banks have turned profitable. "Six banks are now out of PCA (prompt corrective action). We have also accelerated the process of bank mergers. Today banks are spreading their network across the country and are striving towards making a global mark for themselves."

On foreign investments, PM Modi said that India is one of the top 10 foreign direct investment (FDI) destinations in the world today. "In the last few years, the speed of influx of FDI in India has increased. FDI, for me, has two meanings. I use them accordingly. One is Foreign Direct Investment, and for me, another one is, 'First Develop India'."

GST compensation for 9 large states could double to Rs 70,000 crore in FY20: ICRA