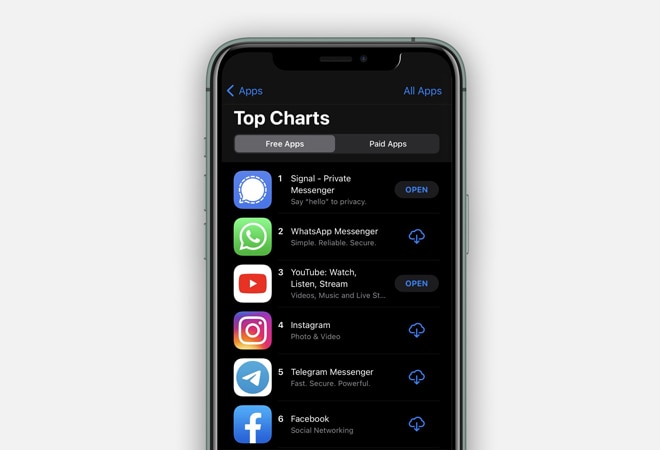 Amid the WhatsApp-Facebook furore, the one app that has come out shining on top is Signal. As the outrage against WhatsApp's latest policy of sharing data with Facebook has grown fiercer, Signal continues to climb up the charts. In a tweet, the app said that it has become the No. 1 downloaded app in the free apps category on App Store. Not only India, it became the top downloaded app in Germany, France, Austria, Finland, Hong Kong, and Switzerland as well.

Signal said it is seeing such a surge in new users that it is witnessing delays in phone number verifications of new accounts. Signal's jump in the charts has come due to Elon Musk's endorsement as well as the WhatsApp outrage.

Musk had tweeted on January 7: "Use Signal" to his 41.5 million followers. The Tesla CEO has also been vocal in his criticism of Facebook. He recently tweeted an image of a man stacking dominoes. The first of the dominoes, referring to Facebook, read "a website to rate women on campus" and the last of the dominoes said "the Capitol seems to be under the control of a man in a viking hat".

This is called the domino effect pic.twitter.com/qpbEW54RvM

The app is available on Android and iOS and also on iPad. Windows, Linux and Mac users can also download the app. It is now being seen as a mobile messaging app as well as an alternative to the Facebook ecosystem.

It is being used extensively by activists, journalists, lawyers, researchers, security experts as well as dissidents. It is backed by the likes of Twitter CEO Jack Dorsey and American whistleblower Edward Snowden.

Signal, that goes with the tagline "Say hello to privacy" has been around 2014. It was developed by Signal Foundation and Signal Messenger LLC, a non-profit company. The Signal Foundation was created by WhatsApp co-founder Brian Acton and Signal Messenger CEO Moxie Marlinspike. Acton left WhatsApp in 2017 and donated $50 million to help fund Signal.

Last date of ITR filing today: Govt urges taxpayers to not miss deadline; all you need to know