Vizag gas leak: The decision to send the expert teams was taken during a high-level meeting in Delhi on Thursday. The teams will ensure measures for the safety of the affected people and secure the site affected by the disaster 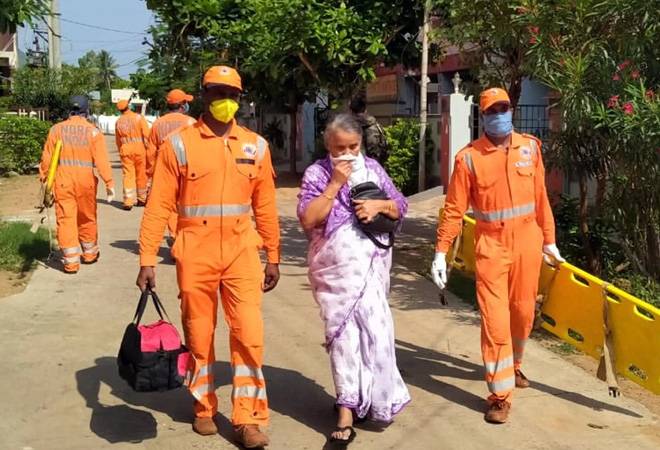 Vizag gas leak: The central government has deployed a team from the Chemical, Biological, Radiological and Nuclear (CBRN) unit of the National Disaster Response Force (NDRF) Pune, along with an expert team of National Environmental Engineering Research Institute (NEERI), Nagpur, to manage the crisis on the ground and take measures to solve the short term and long term medical impact of the gas leak at Visakhapatnam.

The government confirmed that the incident occured because of styrene gas leakage from the LG Polymers factory on Thursday at 3 am in RR Venkatapuram village, Gopalapatnam Mandal in Visakhapatnam District. The leak affected the surrounding villages namely Narava, B.C Colony, Bapuji Nagar, Kampalapalem and Krishna Nagar. The tragedy has so far killed 11 people and led to the hospitlisation of hundreds of people.

The state police is also probing reasons for the gas leak and is investigating whether LG Polymers flouted the CBRN safety guidelines issued by the NDMA. The plant was restarting after being closed for a while due to the nationwide coronavirus lockdown. The Indian Chemical Council, a grouping of Indian chemical companies, had warned a couple of weeks ago that certain issues could crop up from a sudden shutdown and restarting of chemical plants.

The decision to send the expert teams was taken during a high-level meeting in Delhi on Thursday. The teams will ensure measures for the safety of the affected people and secure the site affected by the disaster. Chaired by Prime Minister Narendra Modi, the meeting was attended by Defence Minister Rajnath Singh, Home Minister Amit Shah, and Ministers of State for Home Affairs, Nityanand Rai and G Kishan Reddy, besides other senior officials, said a government statement. Various experts were also consulted to ascertain short term and long term damage control measures.

The statement said styrene is a colourless, flammable liquid which is used to prepare polystyrene plastics, rubber and fibre-glass and is used in pipes, insulation, automobile parts etc. Its exposure is through ingestion, inhalation or contact (skin). Styrene gas, which is toxic in nature also causes respiratory problems and other medical conditions.

Common symptoms of styrene exposure include irritation to eyes, nose and skin, gastrointestinal and respiratory effects and neurological disorders depending on the exposure. Its long term exposure may cause central nervous system and kidney related problems, depression, headache etc. The department of health and human services USA lists styrene as reasonably anticipated to be human carcinogen.

To ascertain the level of styrene in contaminated air, samples of air have to be analysed in detail using a special styrene detection device. It is unlikely to remain longer in the environment as when released into the soil or water styrene is expected to readily biodegrade and evaporate quickly. While released into the air, styrene will readily degrade by reaction with photo-chemically produced hydroxyl radicals and is expected to have a life of less than one day, said the government.