Why India's $5 trillion economy is a no-brainer; we should aim higher instead

India is already growing at a rate faster than the rate required to hit the USD 5 trillion mark. Irrespective of everything else, India will hit the bull's eye by 2025. India a $5 trillion economy: Can we or can't we?

The freezing ski resort of Davos, Switzerland in January 2018 was the first witness of Prime Minister Narendra Modi's ambition of seeing India as a $5 trillion economy by 2025. True to the theme of the World Economic Forum's annual event, "Shared Future in a Fractured World", Modi invoked the oldest Upanishad -- Isha Upanishad -- to assure the global business community that Indians consider the world one big family, and that our future lay together. "We are moving towards becoming a five trillion US dollars economy by 2025. We will become 3rd largest consumer market in the World by 2025. According to the World Bank and IMF our growth rate is going to be steady and high. India ranked 3rd in WEF's list of most trusted governments in 2017," Modi said.

The breadth of his oratory at the WEF plenary address may have overshadowed the $5 trillion goal, but he reiterated the target at Niti Aayog's Governing Council Meeting in New Delhi this June. New Finance Minister Nirmala Sitharaman took the cue and emphatically asserted the $5 trillion target in Budget 2019 as well. However, she left the target date open-ended in her Budget speech: "Our economy was at approximately US$ 1.85 trillion when we formed the Government in 2014. Within 5 years it has reached US$ 2.7 trillion. Hence, it is well within our capacity to reach the US$ 5 trillion in the next few years."

That triggered a public debate: Can we or can't we?

It's a no-brainer. India is already growing at a rate faster than the rate required to hit the $5 trillion mark. Irrespective of anything else, and barring unforeseen DeMo-like shocks to the economy, India will likely achieve the $5 trillion GDP target by every growth parameter (between 11 and 12 per cet per annum) by 2025 (see chart), provided the Rupee-Dollar rate hovers around Rs 70. Importantly, it will definitely fall short of the $5 trillion mark by each growth parameter in 2024. By most accounts, including PM's address at WEF, India aims to reach the mark by the end of fiscal 2024-25. 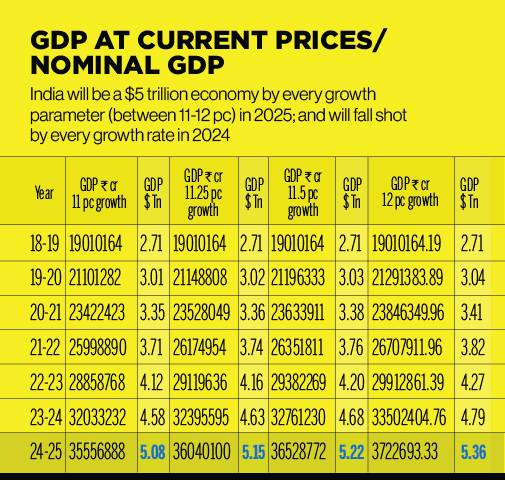 Back then, in January, 2018, it meant doubling the economy in 7 years. Today -- a year later -- it means growing by another 85 per cent -- fairly achievable, given the prevailing rates of growth.

Clearly, neither the government nor World Bank/IMF is referring to this number. 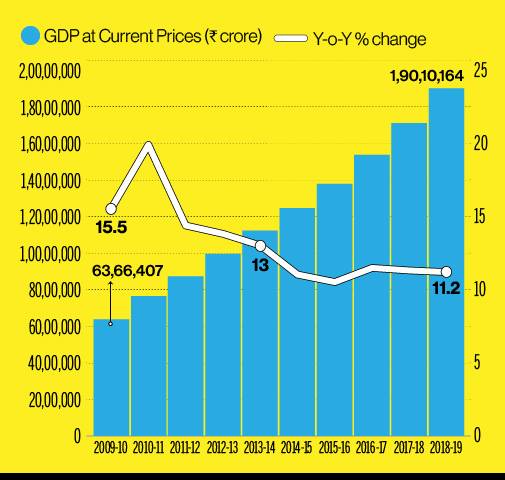 World Bank's Nominal GDP/Current prices are annual inflation plus GDP at Constant prices. Hence, if India achieves an average real GDP growth rate of 7-7.5 per cent per annum until 2025 and inflation stays in the 4 per cent range, India's $5 trillion aim is hardly a stretch target. It's a given. Perhaps, we should aim higher.

India must ensure the real GDP stays closer to 8 per cent mark by reviving consumption which will directly trigger the private investment cycle. Since India Inc. suffers from a low capacity utilisation of barely 70-72 per cent it's unlikely companies will invest in new capacity creation unless higher consumption increases the capacity utilisation to around 80-85 per cent. The answer lies in encouraging greenfield investments in areas such as defence manufacturing which practically do not exist in the country. It could help trigger a revival in investment cycle.

Government's aim to encourage mega manufacturing plants in greenfield areas such as chip manufacturing, lithium ion battery plants is a move in the right direction. Only, this isn't the first government to theorise such an opportunity. Successive governments since Rajiv Gandhi's have tried and failed at this.

Yet, given the government's stretched balance sheet, Budget 2019 has done little to help consumption. So our best case scenario relies on the hope that public investment will turn around the investment cycle sooner than later, still hoping new investment will come in greenfield instead of brownfield projects. The former creates enormous economic value from scratch while the latter creates only incremental value.

But none of these can separate India from its destiny of $5 trillion. Wish we had aimed at a moonshot of $5.5 or $6 trillion instead.