India's announcement that it will cut emissions by 35 per cent by 2030 at 2005 levels is certainly a welcome announcement. But the key is to sensitise the international community and get it to help us. 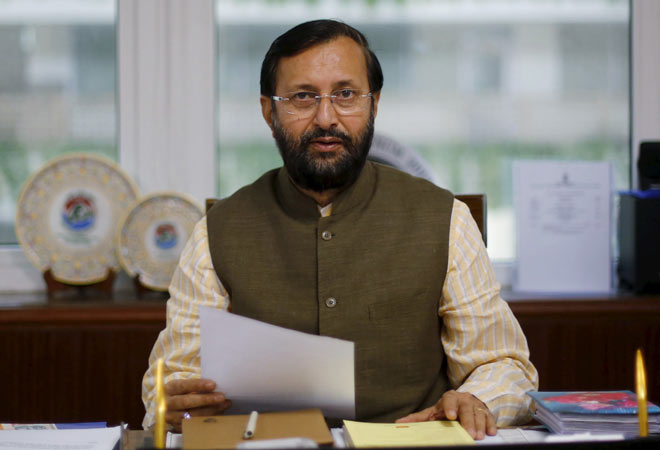 Environment Minister Prakash Javadekar poses after an interview with Reuters inside his office in New Delhi, India, September 21, 2015. (Photo: Reuters)

India's announcement that it will cut emissions by 35 per cent by 2030 at 2005 levels is certainly a welcome announcement. We all pray, it is achieved. But the key is to sensitise the international community and get it to help us with technology-transfer and low-cost finance to achieve this ambitious goal. For, we will need at least $2.5 trillion, if not more, to implement all the planned actions.

We collectively need to have a strategy and action plan in place to meet this objective. The question is whether the collective submission of Intended Nationally Determined Contributions (INDCs) by 196 members of the United Nations Framework Convention on Climate Change, ahead of the Convention on Climate Change due in Paris from November 30 to December 11, is enough.

Can these submissions achieve the goals of appropriately limiting their collective carbon-dioxide emissions? Will climate justice be done by all members? We will get the answer in December this year - in Paris. Our future is in the hands of the leadership of these 196 members.

It is no coincidence that India chose to submit its own INDCs late on October 1. The submission actually coincided with Mahatma Gandhi's birth anniversary a day later, back home. Much before the climate change debate began, Gandhi said everyone should act as a trustee of the environment and use natural resources wisely.

He said it was the moral responsibility of every human to bequeath to the future generations a healthy planet. "A man should be his own scavenger," the Mahatma said, wanting us to be sensible and take up the responsibility for resolving the climate change issue.

As we race against time to ensure that there will be a far-reaching global agreement on climate change by the time the Paris meet concludes on December 11, we do have known technologies to be able to reduce our dependence on fossil fuels. The question is our collective determination to find the alternatives and availability of low-cost money to implement them.

The fossil-fuel alternative has to become more expensive for the user. For example, there is clear link between energy and water. Take the case of national capital. Delhi is not an agriculture state, but pumping of water here takes up 50 percent of all the energy used.

We need to have compulsory water harvesting and ban the production and sale of GLS lamps in India. These are very energy inefficient. Energy efficient systems need a strong promotion through taxation and pricing policy -- an example is of water heating in Delhi. Why is Solar not popular?

Why has drip irrigation not taken off in agriculture? Why can we not price water adequately to conserve it and not give it away free to agriculture - and now, even to urban dwellers? Our 780 million cows can solve the energy storage issue for India:

Cow dung from 100 cows can produce 30 KVA of electricity. From 780 million cows, we should be able to generate 234 GW at relatively low cost. The key is collection of the Cow Dung. We already have indigenous technology to grow fresh grass using hydroponics for the cows on the basis of daily demand.

This apart, we should have DC distribution system in these villages and develop LED lamps that run on DC current and also Fans. This, if feasible and implemented, will be a game changer for India's economy and well-being.

Global poverty rate to fall below 10 per cent: World Bank