Gopinath said India will have to grow at 10.5 per cent in nominal terms as against 6 per cent in the last six years, and 8-9 per cent in real terms in order to achieve the target 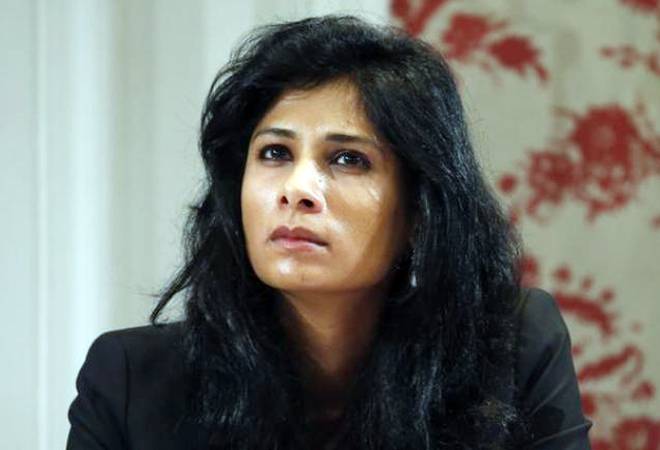 The International Monetary Fund is set to join other downbeat analysts and cut the growth estimate for India "significantly", its India-born chief economist Gita Gopinath said on Tuesday.

The Washington-based institution had come out with an estimate in October and will be reviewing the same next month in January, she said at the India Economic Conclave organised by Times Network.

A fall in consumption, lack of private investments and sluggish exports are being blamed for a slower GDP growth which slid to a six-year low of 4.5 per cent in September. The RBI and other watchers have done downward reviews of their growth forecast for India for FY2020.

Gopinath said India is the only emerging market which has thrown a surprise of this kind.

"If you look at recent incoming data, we would be revising our numbers and come up with numbers in January, and it is likely to be a significant downward revision for India," she said, refusing to share a number or even mention if it would be under 5 per cent.

She also sounded doubtful about the country achieving $5 trillion GDP target by FY25, and chose to present her case arithematically.

The 38-year-old economist said India will have to grow at 10.5 per cent in nominal terms as against 6 per cent in the last six years, and 8-9 per cent in real terms in order to achieve the target.

She pitched for the government utilising its massive mandate to bring in land and labour market reforms as essential aspects if India were to achieve its $5 trillion aspiration.

Gopinath also said that it is good for an economy to have aspirations and India should be doing all in order to achieve the number.

She warned that the fiscal situation in India is "challenging" and the country will certainly breach the 3.4 per cent deficit target. On the fiscal management front, she acknowledged the cut in corporate taxes announced earlier this year, but rued that there was no revenue increasing measure announced in parallel.

India's problems are in the financial sector and the policymakers should address the same at the earliest, she said, mentioning the delays in dud asset resolutions and the lack of capacity in the National Company Law Tribunals in handling the cases.

She also said that the issue of rural income growth needs to be addressed which should also include ways to increase farm productivity which is very low as compared to world averages.

She refused to choose between India and China on who is worse in terms of the state of the economy, stating that both the economies are different and a comparison will not be possible.