The industry has hit new lows across the board as tight liquidity, low consumption sentiment and increasing costs due to stricter safety norms have combined to form a strong headwind The Indian automobile industry seems to set on the path towards breakdown. Photo credit: IANS

In the worst ever sustained slowdown ever witnessed in the domestic automobile industry, passenger vehicle sales crashed by 17.54 per cent in June, the eighth successive month that sales have declined.

Contrary to expectations, the slowdown that had started almost a year ago in July 2018 and deepened since March 2019, has only worsened further. Unlike slowdowns in the past, this time around the decline is homogenous with every segment and sub segment in the industry in the red. The worst hit is the passenger car segment that slid by 24 per cent followed by passenger vehicles that includes cars, SUVs and vans at 17.5 per cent, commercial vehicles at 12.27 per cent, three wheelers at 16.36 per cent, motorcycles at 9.57 per cent, scooters at 14.81 per cent and two wheelers at 11.69 per cent. Overall, automobile sales in the country declined by 12.34 per cent in the month.

"We have not seen this kind of slowdown ever. Nothing is going right for the industry. We believed that growth will come back eventually but it hasn't," said a visibly deflated Rajan Wadhera who heads industry body Society of Indian Automobile Manufactures (SIAM). "This is really worrying. In the short term, the de-growth may intensify further. We were looking for a reduction in GST (in the Budget), but it has not happened. That would have been a growth enabler." 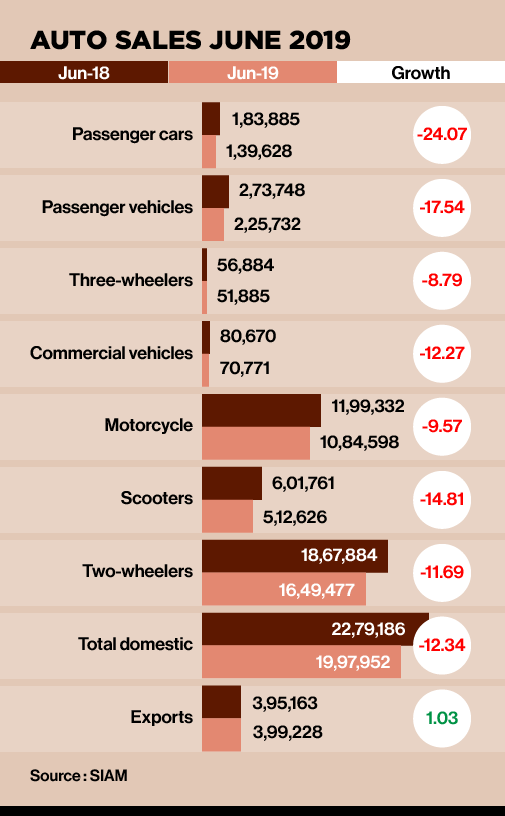 The industry has hit new lows across the board as tight liquidity, low consumption sentiment and increasing costs due to stricter safety norms have combined to form a strong headwind. In the first quarter of the financial year 2019-20, car sales declined 23 per cent, while passenger vehicle sales have gone down 18 per cent. This is the worst quarterly performance since the third quarter of 2000-01 when car sales slid by 27 per cent and passenger vehicle sales by 23 per cent.

Wadhera warned if the slowdown continued any further, it would start impacting government's revenues, corporate investment and eventually lead to large-scale job losses in the sector. The industry employs 37 million people directly or indirectly. 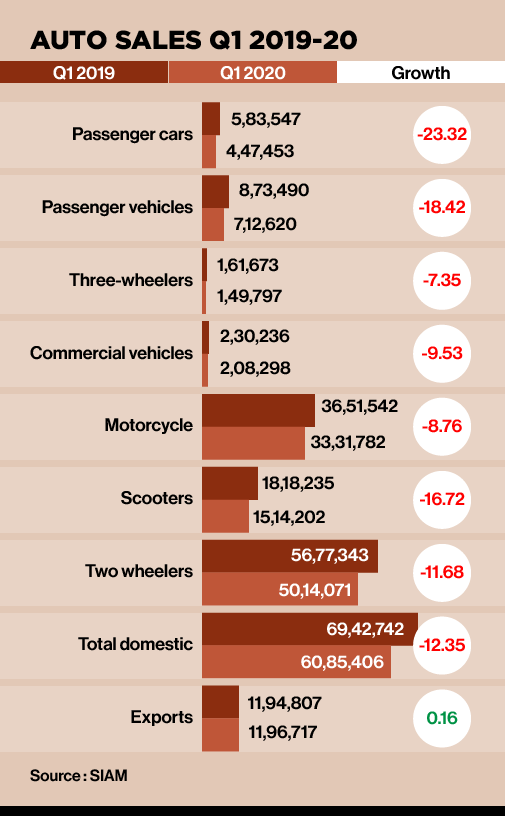 "It is already affecting us (industry) financially as we had to offer discounts to push sales, which have affected our profitability. It will now begin to affect everybody else financially as well. Revenues will go down for the government, there will be no plans for growth or investment which would impact recruitment and job creation," he said. "Soon we will also see job losses especially in smaller ancillary companies where the ability to withstand a slowdown is not very long."

For now, the government does not seem to be in a mood to oblige the industry. There was no mention of a GST cut for fossil fuel vehicles in the Budget presented by Finance Minister Nirmala Sitharaman. Instead, the industry has been penalised with a Rs 2 hike in petrol and diesel prices that affects the operating cost of automobiles, and an increase in import duties on a host of components which makes vehicles more expensive. Passenger vehicles have been kept at the highest 28 per cent GST bracket and attract a cess ranging between 1 and 22 per cent, on top of that.

"It is a bit shocking that the internal combustion engine industry, which has been developed over the last 100 years is going through such a phase and the government is not helping us," he said. "We will go back to them (government) again and explain that the slowdown has to be arrested somehow."

There is, however, one silver lining in the story. While the industry generally tracks wholesale data-vehicles that have been shipped from companies to their dealers-retail sales data that indicate actual sales to customers by those dealers, indicate a much more moderate decline. Data collated from government's Vahan website shows 783,409 passenger vehicles sold in the country between April and June 2019, a decline of less than 2 per cent over the same period in 2018. Similarly, for commercial vehicles, the decline is 10.18 per cent, for two-wheelers 6.56 per cent, and for three-wheelers 6.19 per cent.

"The disparity in the figures (wholesale and retail) indicates stock clearance by the industry. This also gives us hope for some growth in the future as inventory levels are quite low right now. However, we cannot be sure," said Vishnu Mathur, director general, SIAM. "We are hopeful but not certain of growth in the upcoming festive season but need some government support, which is beyond our control."

Running on reserve for some time now, the industry is nearing a breakdown.