After witnessing a phenomenal growth of over 100 per cent between the December quarter of 2017 and September quarter of 2018, there has been a a continuous downward spiral of the aggregate new orders of the industrial and infrastructural construction. Another sector hit hard by the current slowdown in the economy is the industrial and infrastructural construction industry wherein the aggregate new orders slipped to its lowest in the June 2019 quarter. New order inflows that stood at Rs 13,906 crore during the period saw its steepest fall of 80.5 per cent since June 2011 quarter, according to CMIE database. The firms bagged new orders to the tune of Rs 71,276 in the corresponding period last year. After witnessing a phenomenal growth of over 100 per cent between the December quarter of 2017 and September quarter of 2018, there has been a a continuous downward spiral of the aggregate new orders of the industrial and infrastructural construction received by companies from Rs 52,133 crore to Rs 13,906 crore. "The general elections in April and May 2019 resulted in fewer orders from the government and PSUs from where most of the orders were received in the past two years," adds a CMIE report. 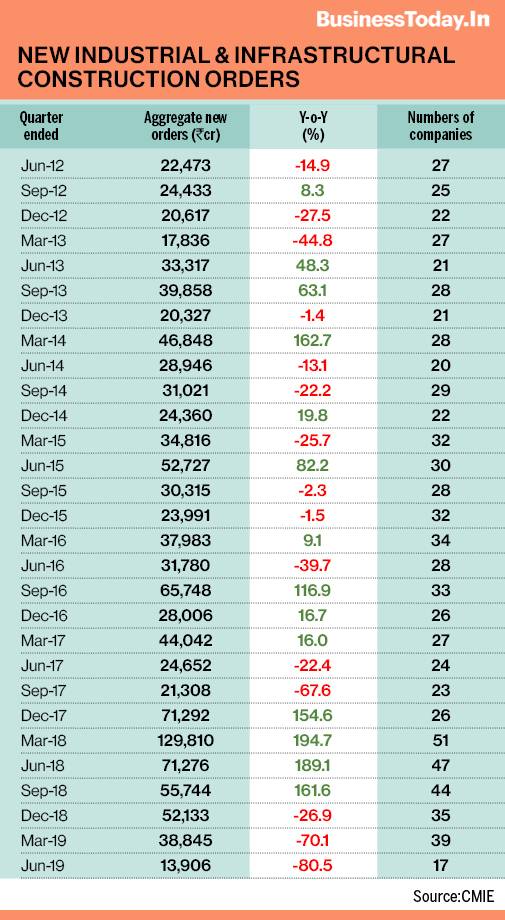 In February 2019, Larsen & Toubro (L&T) announced that it has stopped disclosing order size amid intense competition but even if we exclude the industrial and infrastructural construction orders received by L&T in June 2018 quarter, the overall order value would stand at around Rs 58,473 crore and the new orders in the first quarter of fiscal year 2019/20 are still lower than these levels, as per the CMIE data.

With a fall of 11.7 per cent in the year 2018/19, the combined order wins by industrial and infrastructural construction companies that stood at Rs 2.2 lakh crore declined for the first time in the last three years after 2014/15. In the previous year, companies reported aggregate order wins worth Rs.2.5 lakh crore. The revenue visibility of most infrastructure companies is more than two years.

The National Highways Authority of India (NHAI) topped the list in terms of the highest value of orders placed in 2018/19. NHAI placed orders worth Rs 20,668.7 crore during the year, followed by Maharashtra State Road Development Corporation (MSRDC) and Mumbai Housing & Area Development Board, which placed orders worth Rs 17,011 crore and Rs 11,744 crore, respectively. The construction sector currently has a share of 8 per cent in the gross value added at the current prices and has de-grown from 9.6 per cent in Q1FY19 to 5.7 per cent in Q1FY20. It has contributed considerably to the sharp decline in GDP growth from 8 per cent to 5 per cent, during the period.

In a bid to further push the country's infrastructure, the government recently announced plans to build infrastructure worth Rs 100 lakh crore ($1.4 trillion) over the next five years. The announcement came in the wake of a slowdown in the economic growth, which hit a six-year low. The money is likely to be spent on world class infrastructure in rail, road, highways and other projects, which contribute to the economic growth. "This is unlikely to propel the inflow of new orders immediately as we expect them to stay muted in the coming quarters due to current economic slowdown. Also, companies would focus more execution of their current orders due to robust order-book position rather than bidding for new orders," adds the CMIE report.

Also read: Slowdown Blues: Industries are going through a tough time; this will pass, says Gadkari