Georgieva, on a leave of absence from her post as chief executive officer of the World Bank during the IMF nomination process, told reporters she was in high gear with her sleeves rolled. 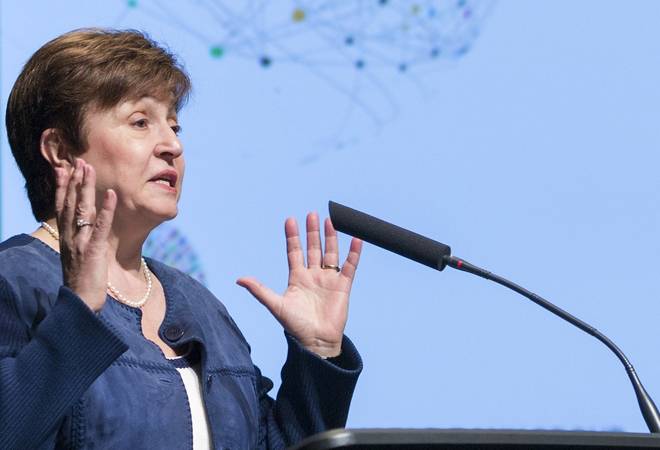 Bulgarian economist Kristalina Georgieva was confirmed on Wednesday as managing director of the International Monetary Fund, the first person from an emerging-market economy to head the world's crisis lender with its $1 trillion in resources.

A center-right politician who grew up in Bulgaria under Communism, Georgieva built a reputation during her time at the World Bank and the European Commission as a tenacious straight shooter, champion of gender equality and leader in the global fight against climate change.

Georgieva, on a leave of absence from her post as chief executive officer of the World Bank during the IMF nomination process, told reporters she was in high gear with her "sleeves rolled, ready to work" when she starts the job on Tuesday.

She will face a host of challenges as the head of the IMF, including a global economic slowdown triggered by escalating trade tensions between the United States and China, and historically high debt levels.

"Warning signs are flashing, and we must be ready to be tested," Georgieva, 66, told reporters at the bank's Washington headquarters after her confirmation.

The United States, which represents the largest voting bloc on the IMF board, has withdrawn from multilateral accords, and risks are growing in emerging markets like Argentina, which last year received a $57 billion bailout, the IMF's largest ever.

Georgieva said her priority would be to help the bank's 189 member countries minimize risks. The bank would aim to be attentive to all members, big or small, she added.

Georgieva, backed by French President Emmanuel Macron, won support last month from the rest of the European Union, as well as tacit backing from the United States.

In her new role, she will need to "work on rebuilding the institution's legitimacy among emerging market economies," said Eswar Prasad, a Cornell University professor who is the former head of the bank's China department.

The world's "major advanced economies continue to view the key international financial institutions as their fiefdoms," he said.

An IMF board source told Reuters before Wednesday's confirmation that Georgieva was ready for the job. "She has convinced the board that she is the leader that the institution needs and will be a strong advocate for the multilateral system," the source said, speaking on condition of anonymity because the board's deliberations are not public.

Georgieva's nomination has sparked great pride in her home country, which had an IMF rescue program just two decades ago.

Bulgarian Prime Minister Boyko Borissov congratulated Georgieva in a posting on Facebook: "This is a huge achievement for Bulgaria. I am convinced she will deal wonderfully with the management of one of the world's largest institutions."

Georgieva replaces Christine Lagarde, who became the first woman to head the IMF when she took the helm in 2011. Lagarde, 63, guided the lender through the European sovereign debt crisis, which began about a month after she took office. She is departing to head the European Central Bank.

Before her appointment at the World Bank, Georgieva held numerous senior European Commission posts, including budget commissioner. On Wednesday, she underscored the fund's role in building stronger economies and dealing with challenges such as inequality, climate risks and rapid technological change.

Scott Morris, a senior fellow at the Center for Global Development, said Georgieva quickly made an impact after assuming the No. 2 role at the World Bank in early 2017. She pushed for consensus on a $13 billion capital increase and reform package agreed to last year. Under the reforms, lending to China and other wealthier developing countries will decrease, with more resources going to needier countries.

"She was able to bring together a diverse group of shareholders. That's her strength," said Morris, a former U.S. Treasury official. "What's less clear is how she will handle the day-to-day business of the fund, that business being the crisis moments. It's harder to see how she will respond in a crisis."

Morris said Lagarde was successful in that she was not viewed as representing European interests, which helped her navigate the Greek debt crisis. Georgieva will have to take a similar multilateral approach, keeping her focus on the interests of the institution and individual countries.

"No one thought of Lagarde as a European chief executive," Morris said. "She rose above that."