While Biden is slightly ahead of Trump in the race for the White House, betting markets seem to be favouring US President Donald Trump as winner 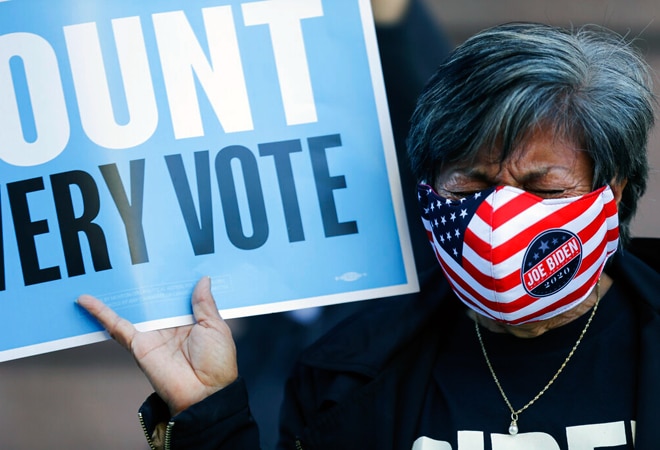 US Elections Results 2020: It's a nail-biting election result in the US right now, with both the candidates giving a tough fight to each other in the most polarised election in the US history.

While Biden is slightly ahead of Trump in the race, betting markets seem to be favouring US President Donald Trump as the winner. The data from two aggregators suggest Trump is winning over Biden in the US Elections 2020.

Bettors on British betting exchange Betfair are giving Trump a 60% chance of winning the second term in the White House, up from 39% when polls opened on Tuesday morning, Reuters reported. Biden's chances, as per Betfair, have declined from 61 per cent from Tuesday to 40 per cent today.

It could be a nervous night for Biden considering the tight competition between both the presidential candidates, Betfair spokesperson Sam Rosbottom said.

Meanwhile, the UK-based Smarkets Exchange says Donald Trump has 65 per cent chances of winning the elections compared to Biden who has 35 per cent win-odds. This is a stark difference from pre-poll analysis, which predicted Trump's chances at 39 per cent, while Biden's chances at 61 per cent.

Trump's holding the fort in the key swing state of Florida played a huge role in the shift in the betting perception among betters, suggest experts. Amid this, Biden needs to bring crucial Midwestern states of Pennsylvania, Michigan and Wisconsin in his fold.

The US appears to be on track to see over 160 million votes cast in the 2020 presidential election, a turnout rate of about 67 per cent, which is higher than the country has witnessed in more than a century.

As per the current trends, Biden has already won 236 electorates, while Trump is trailing behind at 213. In a press briefing, Trump thanked the American people for their tremendous support. He said a "very sad group of people is trying to disenfranchise that group of people and we won't stand for it... The results tonight have been phenomenal."

Alleging fraud in voting, Trump said in his opinion, his party has already won. "We'll be going to the US Supreme Court. We want all voting to stop. We don't want them to find any ballots at 4 in the morning and add them to the list... as far as I'm concerned, we've already won."