The year was a record-breaking one with investments jumping 3x to touch a record $38 billion in 2021, according to the annual report by research firm, Tracxn.

Indian start-ups have had a phenomenal success when it comes to attracting private, and public investments in 2021. The year was a record-breaking one with investments jumping 3x to touch a record $38 billion in 2021, according to the annual report by research firm, Tracxn. Late-stage funding rounds constituted more than $30 billion of the total equity investments into the start-ups, which was propelled by the likes of Tiger Global, SoftBank, Falcon Edge , Sequoia Capital writing big cheques for the unicorns. There were a total of 2055 funding rounds, including 712 Series A +rounds, as per the data from Tracxn.

The ban on popular Chinese short-video platform TikTok has proven to be as a blessing for home-grown networking platforms with the sector witnessing maximum funding at $1.4 billion, a whopping 1259 per cent increase year-on-year (YOY) in 2021, with the chunk of the money going to prominent firms like ShareChat, Verse Innovation, and JetSyntheses.

This was followed by the food delivery sector where the start-ups saw a 369 per cent jump in fund raising at $1.3 billion, with major investments in Swiggy, Zomato, Rebel Foods. Edtech, Payments, and Alternative lending sectors also witnessed considerable investors traction with fund-raises jumping by 54 per cent at $1.1 billion, 189 per cent ($1.1. billion) and 42 per cent ($ 1 billion), respectively. 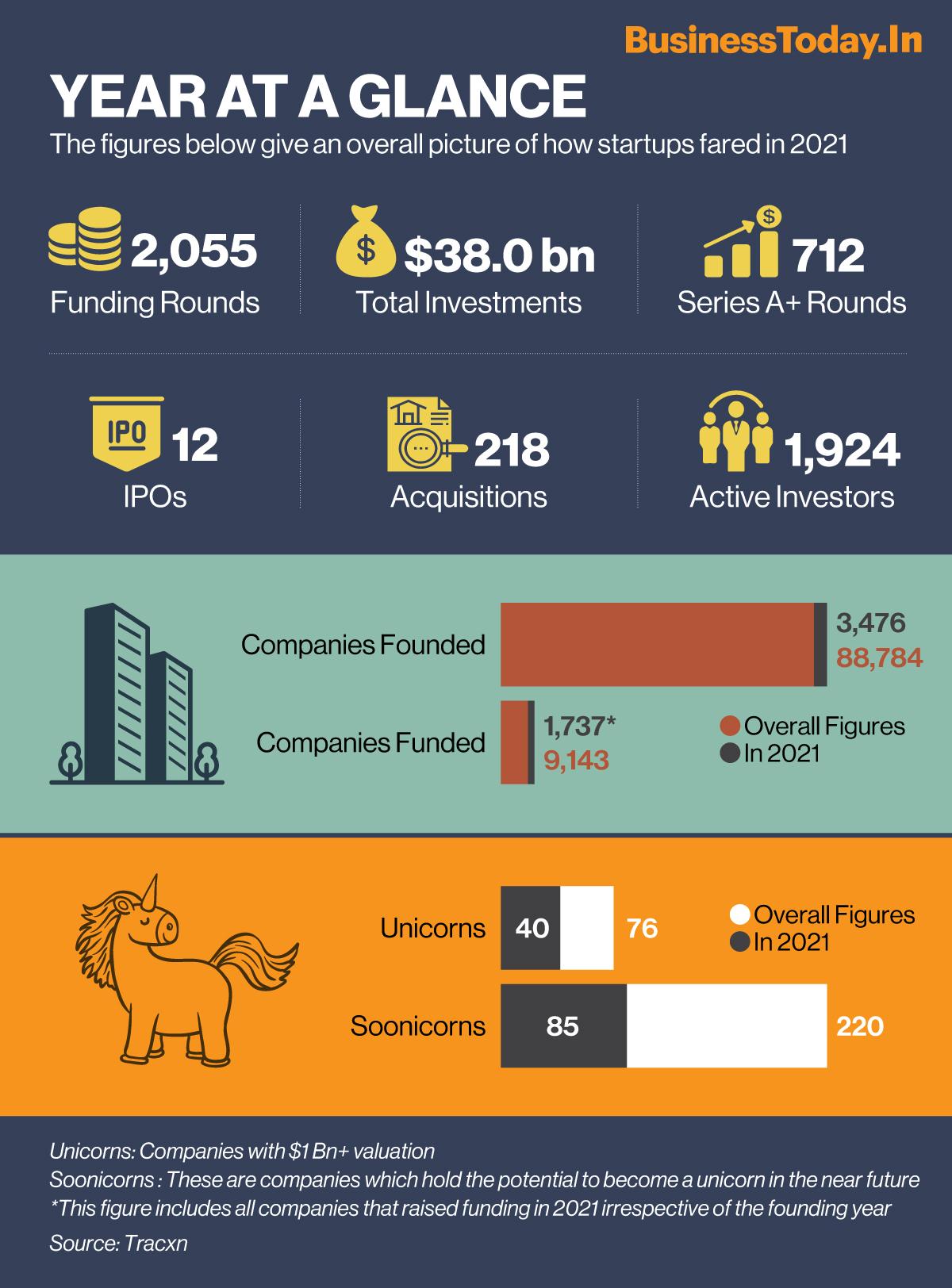 A flurry of unicorns

The pace at which the unicorns were formed in 2021 was unparalleled with Traxcn annual data showing that start-ups worth $40 billion were minted during the year, thereby taking the total number of such firms in India to 76. Apart from unicorns,  85 'Soonicorns', or companies nearing unicorn status, were also formed this year taking their total number to 220.

The rate at which unicorns are getting created in India -- world’s second largest Internet market -- has seen a remarkable growth. The statistics shared by Tracxn suggests that since 2017 onwards, start-ups are increasingly reaching the billion-dollar valuations, witnessing more than 2X jump in 2021 (40 new unicorns) from 2020 (16 new unicorns)

The year also was about unicorns that took their company public. The unicorns that debuted on the stock exchanges ( both domestic and overseas) included Paytm, Zomato, Nykaa, Freshworks, Nazara Technologies, and RateGain, with a total market capitalisation of the companies nearing $45.03 billion, the Tracxn data showed.

The number of international investors which funded Indian start-ups this year jumped from 668 in 2020 to 990 in 2021. Is Delhi-NCR the new start-up capital?

However, when it came to equity funding, Bengaluru still commanded the lion’s share having received $30.7 billion from FY19-21, whereas Delhi-NCR ‘s share stood at 30 per cent, with the start-ups based out of the region raising $18.6 billion in FY19-21. Mumbai-headquartered start-ups received $8.6 billion during the period, contributing to 14 per cent of the market share.