Reality Check: Stress in NBFCs shows no sign of abating

Insolvency and Bankruptcy Rules of 2019 would help but more needs to be done: tighter RBI control and supervision, infusion of long-term funds (including capital) and reduction in mismatch in assets and liabilities

The Insolvency and Bankruptcy Rules 2019 were notified on November 15, bringing non-banking financial service providers into the ambit of the insolvency and liquidation proceedings (IBC Code)
Prasanna Mohanty

Rakesh Wadhawan and his son Sarang have not only spelt disaster for the 16 lakh depositors of Punjab and Maharashtra Co-operative Bank (PMC), who had 73% loan exposure to their real estate company Housing Development & Infrastructure Ltd (HDIL) now undergoing insolvency proceedings, but also jeopardise other public depositors and banks.

That is because the Dewan Housing Finance Corporation Ltd (DHFL), a deposit-taking non-banking financial company (NBFC-D) they promoted, has become the first one in the shadow banking sector to be taken over by the RBI (on November 20) for initiating insolvency proceedings under the new Insolvency and Bankruptcy Rules of 2019 notified on November 15. The DHFL's outstanding dues are reported to be Rs 76,000 crore.

RBI on an NBFC de-registration binge: 56 in Aug, Sept and Oct

But the fall of DHFL maybe the proverbial tip of the iceberg in the shadow banking sector - second to the banking sector in lending with a size of 15% of the scheduled commercial banks' (SCBs) combined balance sheet (loans or advances); the urban co-operative banks' (UCBs) being the third with 11% of that of the SCBs'.

On November 15, 2019, the RBI issued a notification cancelling "certificate of registration (CoR)" of 25 NBFCs, declaring that those "shall not transact the business of a Non-Banking Financial Institution". The same day, it had de-registered another 5 which had surrendered their registrations.

A fortnight earlier on September 30, it had issued another notification de-registering 26 more NBFCs. Most of these NBFCs are located in Delhi/New Delhi, with a few in Assam, West Bengal, Punjab and Uttar Pradesh. All the 56 de-registrations happened in the months of August, September and October.

The RBI notifications don't give reasons for de-registration or surrender of registrations, nor indicate what would be the impact on depositors or banks.

It then explains the reason: "NBFCs are required to have a minimum net owned fund (NOF) of ?20 million (Rs 2 crore). In a proactive measure to ensure strict compliance with the regulatory guidelines, the Reserve Bank cancelled the Certificates of Registration (CoR) of NBFCs not meeting this criterion."

A minimum NOF - net worth of a finance company - of Rs 2 crore for registration with the RBI was set in April 1999 (up from Rs 25 lakh earlier). Of the 56 NBFCs which were de-registered in August, September and October, 14 had been registered before April 1999. This would indicate that all these NBFCs fell below the NOF thresh-hold in recent months.

Such a high failure rate raises a serious question that calls for the answer: Does it indicate a crisis building up in the economy adversely impacting the NBFC sector? The RBI reports don't explain.

More NBFCs getting de-registered since FY16

The RBI's 2018 report on the banking trends provides a graph (on page 119) which shows more NBFCs are getting de-registered than registered since FY16. 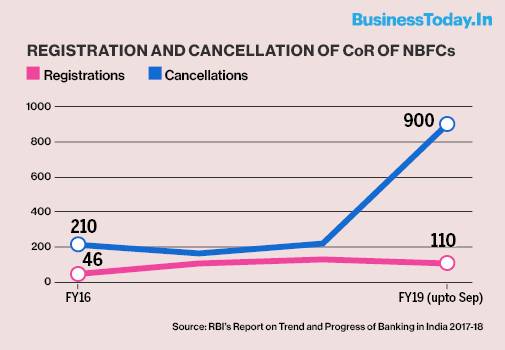 Does this indicate that the crisis in the economy has been building up since FY16?

The RBI's Financial Stability Report of June 2019 shows that the stress assets in the NBFCs, measured in terms of GNPA ratio, increased from 5.8% in FY18 to 6.6% in FY19. The GNPAs has witnessed steady growth since FY15 when it was 4.1%.

The NNPA ratio (net NPA to net advances), however, declined marginally from 3.8% in FY18 to 3.7% in FY19 and the capital to risk-weighted assets ratio (CRAR) moderated to 19.3% in FY19 from 22.8% in FY18 - yet remaining higher than the prescribed limit of 15%, reflecting the financial soundness of the sector.

This gives a mixed-signal about the state of NBFCs in the absence of explanations. 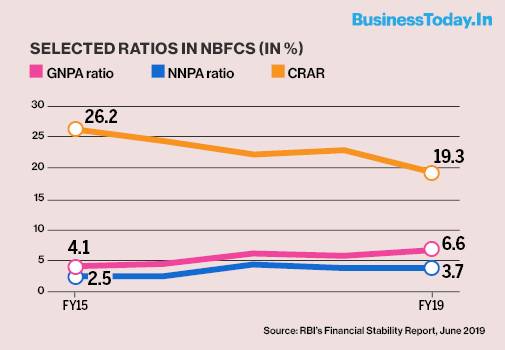 The crisis in NBFCs sprang to light last year when the IL&FS - a major lender in the infrastructure and financial services with a debt of Rs 91,000 crore, out of which Rs 57,000 crore are bank loans defaulted and the government superseded its management in October 2018. The case is now pending before the national company law tribunal (NCLT).

The IL&FS is one of the Systematically non-deposit taking NBFCs (NBFCs-ND-SI) - which constitutes 84.8% of the total assets of the NBFC sector, the rest 15.2% being held by the deposit-taking NBFCs (NBFCs-D). Since the NFBCs-ND-SI are non-deposit taking (not allowed public deposits), their major sources of funds are bank loans and debentures. These are the ones with more than Rs 500 crore in asset size and pose "greater systemic risks" and hence, are subjected to stricter RBI regulations.

The defaults by the DHFL followed this. News reports suggest several other NBFCs - the Reliance ADAG Group companies like Home Finance and Reliance Commercial Finance, Indiabulls Housing Finance, Edelweiss Financial Services and Piramal Capital - have now been downgraded in their ratings, indicating that the crisis in the sector is spreading.

All these developments raise more questions about the RBI's regulatory control over NBFCs.

Vishwas Utagi, the convenor of PMC bank depositors' association and former vice president of all India bank employees association (AIBEA), says since the RBI registers NBFCs and exercises supervisory powers, the current state of affairs does raise serious doubts about its functioning. In the IL&FS case, he says, it also reflects the RBI's failure to regulate credit rating agencies which gave high credit rating to it, thus facilitating bank lending.

Utagi also questions the central government's decision to step in and initiate insolvency proceedings for the IL&FS, which comes under the direct regulatory control of the RBI. He expresses serious reservations about the reported move to bail it out through the public sector entities like LIC and SBI. He says this would transfer private sector stress to the public sector, jeopardising the financial health of LIC and SBI.

Satish Marathe, director in the RBI's Central Board, however, insists that the RBI has been doing good work and the large number of de-registration of NBFCs reflects its persistence and due diligence over the years. Though he points out that the true extent of stress in the NBFC sector may not be known as there is no knowing how many DHFLs are out there, as yet.

NBFCs witnessed a strong credit expansion in FY18 and FY19 (up to September) while that of banks shrunk due to "rising non-performing assets (NPAs) and pervasive risk aversion", according to the RBI's 2018 banking trend report.

The regulator says retail loans of NBFCs grew at a robust 46.2% in FY18, up from 21.6% in FY17. This growth was driven in the vehicle loan segment in manufacturing and commercial real estate and retail trade in the services sector. It lists three reasons to explain this expansion: (a) slowdown in SCBs' credit (b) relative decline in NBFCs' cost of lending vis-a-vis banks and (c) increase in aggregate demand.

Taken together, this would indicate that while there may be demand in certain sectors of the economy, growth is hurt by the reluctance of the SCBs to lend, followed now by the resource crunch in NBFCs.

Marathe says the recent developments have hurt NBFCs' lending. The mismatch in assets and liabilities has become more pronounced after the IL&FS episode as scrutiny in the appraisal of NBFCs heightened. He says NBFCs lend for longer periods (at times more than 5 years) while the line of credit is for a shorter duration (6 months to 2 years), even though they also raise longer duration deposits, bonds and debentures. Secondly, he says, interest rates for credit have gone up impacting the viability and profitability of NBFCs.

The Insolvency and Bankruptcy Rules 2019 were notified on November 15, bringing non-banking financial service providers into the ambit of the insolvency and liquidation proceedings (IBC Code). This would facilitate the resolution process but that may not be enough.

Utagi says the RBI's regulations of NBFCs should be in line with the banking sector, which, he laments, is not visible yet.

Marathe says there is no short term or immediate solutions. According to him, two things need to be done: (a) NBFCs have to infuse long-term funds, including capital and (b) their asset and liability profiles have to match their respective maturity.