The ED has already issued Letter Rogatory (LR) - a request sent to a foreign court for judicial assistance - to 13 countries, including Hong Kong and UAE, to seek their cooperation in the investigation.

For more than a month, top investigation agencies have been digging deep in the so-called 'biggest banking scam' of India's independent history. Every day, more and more skeletons are coming out, exposing the extent to which two famous businessmen fooled the Punjab National Bank - the country's second largest public sector bank - for around seven years.

In the scam now pegged to be around Rs 13,700 crore, the data accessed by India Today reveals that over Rs 450 crore (as per current dollar price) was diverted to around six beneficiaries companies based in Hong Kong and Sharjah (UAE) in just one month - July 2014. India Today also possesses the list of the beneficiary companies, the amount of money transferred, and the dates.

The amount of money, issued as loans through the LoUs (Letters of Undertaking) or LoCs (Letters of Credit) by Punjab National Bank, was later routed to the shell companies linked to Nirav Modi and Mehul Choksi in Hong Kong and Sharjah. These companies include Sunshine Gems (Hong Kong), Sino Traders (Hong Kong), Tri Colour Gems (Sharjah), Diagem (Sharjah), and Auragem (Hong Kong).

The ED has already issued Letter Rogatory (LR) - a request sent to a foreign court for judicial assistance - to 13 countries (mostly regulated by the United Nations), including Hong Kong and UAE, to seek their cooperation in the investigation. Both Nirav Modi and Mehul Choksi are on the run since January 5. Through these LRs, the ED has sought the details of companies associated with the duo, their local addresses, and the beneficiaries involved. 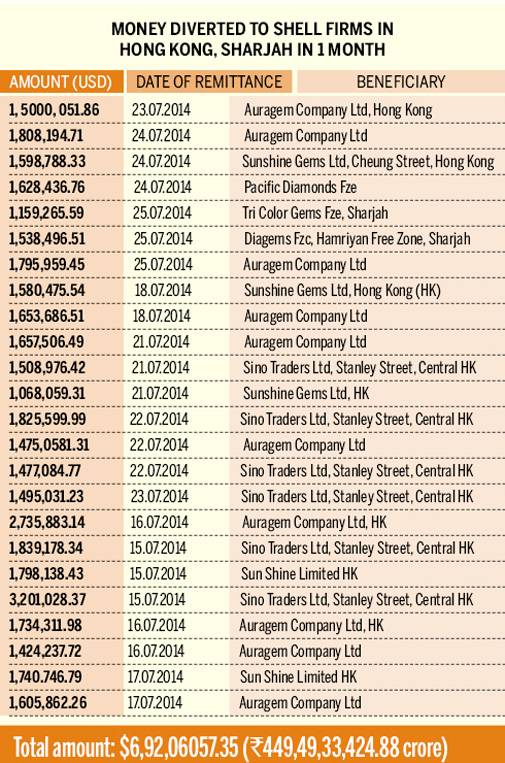 Sources in the ED and Special Fraud Investigative Office (SFIO), requesting anonymity, told India Today that the number of shell companies created by both Nirav Modi and Mehul Choksi could well be around 400. All of them were allegedly used for circular trading, round-tripping and laundering money outside India.

Nirav Modi and Mehul Choksi, in connivance of several senior as well as junior officials, defrauded PNB of several thousand crore of rupees. These PNB officials fraudulently issued LoUs and LoCs on behalf of several companies belonging to the duo for availing buyers' credit from overseas branches of Indian banks. None of the transactions were routed through the CBS (Core Banking Solution) system, thus avoiding early detection of fraudulent activity, which was going on since 2011.

On February 4, PNB said it had detected fraudulent transactions worth Rs 280 crore by Nirav Modi's companies at its Brady House branch in Mumbai. On February 14, the bank held a press conference, revealing the overall loss stood at Rs 11,400 crore. In this entire PNB fraud, the share of the Gitanjali Group companies, owned by Mehul Choksi, is around Rs 7,080 crore, police said in a court filing on March 13. The PNB has already disclosed two more exposures worth over Rs 1300 crore and Rs 942 crore, raising the fraud amount to Rs 13,700 crore.