BT Online Bureau
In the steepest ever increase, petrol rates were on Wednesday raised by a massive Rs 7.54 per litre, the first hike in rates in six months.

Petrol price in Delhi has been hiked by Rs 7.54 per litre to Rs 73.18 a litre with effect from Thursday, state-owned oil companies said in separate but identical press announcements. 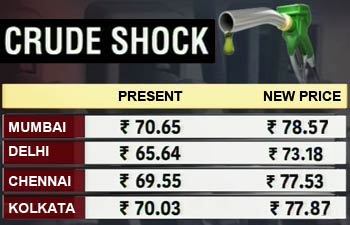 The government had decontrolled petrol price in June 2010 but rates were last increased on November 4 last year. This despite oil price rising by 14.5 per cent and 3.2 per cent fall in value of rupee against the US dollar.

On Tuesday, Oil Minister S Jaipal Reddy had stated that the depreciation in rupee had necessitated an immediate increase in fuel prices.

But rates of diesel, kerosene and cooking gas have not been revised as a high-power ministerial panel headed by Finance Minister Pranab Mukherjee and representatives of key UPA allies like TMC and DMK, hasn't met for almost a year now.