According to CMIE, the urban unemployment rate was at 9.6 per cent, and rural stood at 7.8 per cent in August 2019

During the month of August, employment was nearly 2 per cent higher than it was in August 2018
BusinessToday.In

The weekly unemployment rate in the country stood between 8 and 9 per cent in August 2019, as compared to 7-8 per cent range observed in July, CMIE said in a report on Wednesday. The agency noted that the unemployment rate has hit the highest level since September 2016. 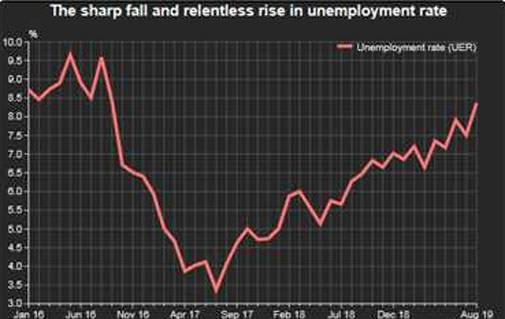 According to CMIE, the urban unemployment rate was at 9.6 per cent, and rural stood at 7.8 per cent during the month under review.

The labour participation rate, one of the factors behind unemployment rate, has risen slowly and steadily to 43.35 per cent in August 2019, from 42.46 per cent in October 2018. It has recovered from the combined shock of demonetisation and GST that led to a rise in unemployment rate in India, the report said.

The increase in labour participation rate is a healthy sign as it hopefully reflects a confidence in labour that they may find jobs, CMIE said in its report.

"Investment conditions have been weak. New investments into large and modern enterprises are important to absorb the rising working age population into the labour markets. However, data from the annual financial statements of companies and from announcements by entrepreneurs do not show any pick-up in investments. Growth in good quality jobs is therefore very poor," added in its report.

According to CMIE, if labour continues to face a rising unemployment rate, and poor employment opportunities, it may start getting discouraged from entering the labour markets.