A total of 11.5 lakh people in Odisha will have to be moved to safer areas. Of them, about 3.3 lakh people have already been shifted 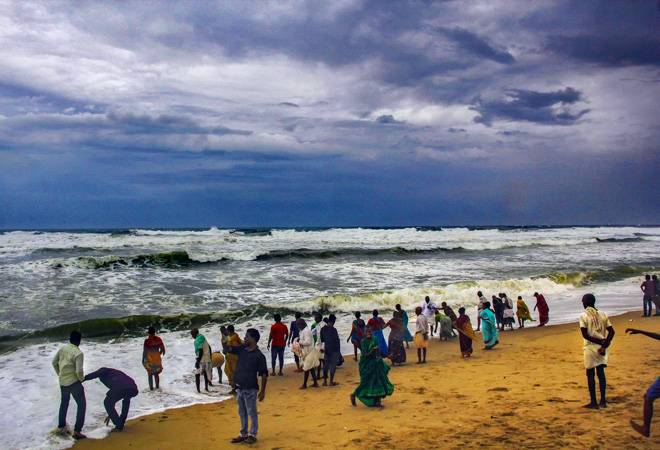 A total of 11.5 lakh people in Odisha will have to be moved to safer areas

An estimated 10,000 villages and 52 towns in Odisha will be hit by the 'extremely severe' cyclonic storm 'Fani', which is approaching India's eastern coast and is expected to make landfall south of Puri on Friday, the home ministry said.

A total of 11.5 lakh people in Odisha will have to be moved to safer areas. Of them, about 3.3 lakh people have already been shifted.

Flight operations from Bhubaneswar will remain suspended from Thursday midnight and from Kolkata from Friday morning and will be resumed as soon the conditions improve.

The Odisha government has conveyed to the National Crisis Management Committee (NCMC), the country's top body for handling emergency situations, on Thursday that 10,000 villages and 52 towns in nine districts will be affected, a home ministry statement said after a meeting of the NCMC, which was headed by Cabinet Secretary P K Sinha.

Action on evacuation is already being taken by the Odisha government and around 900 cyclone shelters have been made ready to house the evacuees.

In Andhra Pradesh, the cyclone is likely to hit Srikakulam, Vijayanagram and Visakhapatnam districts.

The India Meteorological Department (IMD) has warned of a storm surge of about 1.5-metre height which may inundate low-lying coastal areas of Ganjam, Khurda, Puri and Jagatsinghpur districts of Odisha at the time of landfall.

"Arrangements have been made to warn people of the impending cyclone through announcements over public address systems, mass SMS and local media. Teams of NDRF and ODRAF have been put in place," the statement said.

During the NCMC meeting, the cabinet secretary reviewed the preparedness of the states and the central ministries and agencies concerned to deal with the situation arising out of the cyclonic storm.