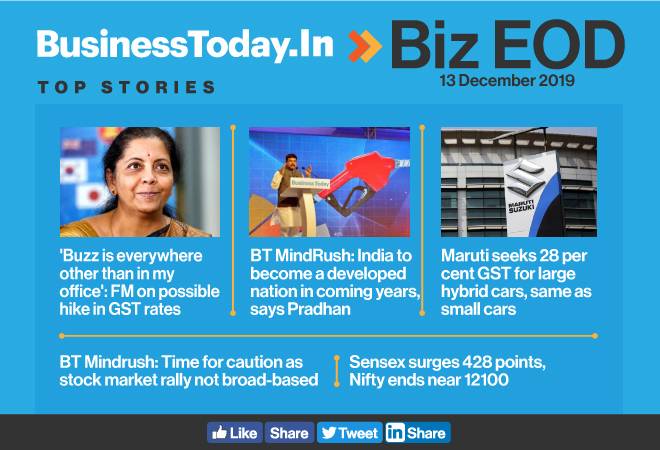 Union Finance Minister Nirmala Sitharaman said there was no discussion on GST rate hike yet. Maruti Suzuki India said the government should look at incentivising hybrid technology in India and tax it at 28 per cent under GST, rate similar to small cars. The current rise in Sensex and Nifty is not broad-based and one should be cautious while investing in the current scenario. Read for more top stories from the world of business and economy:

1. 'Buzz is everywhere other than in my office': Sitharaman on possible hike in GST rates

There have been reports that the GST Council, chaired by Finance Minister Nirmala Sitharaman, could increase taxes as revenue collection fell short of expectations in the last few months.

The Indian industry is going through disruptions but that does not mean that you will die if you don't disrupt, said Pradhan, noting that data is the new oil and the government is formulating a new data policy.

Large hybrid cars do not get any incentive from the government right now but Maruti along with its partner Toyota has been lobbying behind the scenes in favour of hybrids as a suitable intermediate technology before the country is ready for EVs.

The market is witnessing two dichotomies right now - one, the economy is showing signs of slowdown while markets are rising; and within markets, while top 15 companies are driving the Sensex and the Nifty, mid-caps and small-caps are being battered.