The Corporate Social Responsibility (CSR) spends by companies listed on the NSE increased 18 per cent to Rs 11,961 crore in 2018/19, compared to a year-on-year growth of nearly 12 per cent in the previous fiscal. This was 12.4 percentage points lower than the momentous progress (close to 30 per cent) witnessed in FY16. The spending drastically reduced to 7 per cent, a year later. It has grown at a compounded annual growth rate of 17 per cent over the last five years, according to NSE infobase.com. 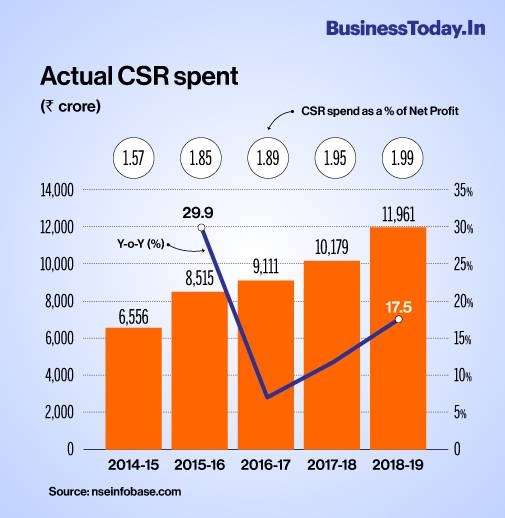 Analysis of 1,132 NSE-listed companies shows that the average net profit of the sample over last three years was Rs 6 lakh crore in FY19 compared to Rs 5.23 lakh crore in FY18. According to nseinfobase.com, the amount, as per CSR requirements, to be spent by the companies was Rs 12,018 crore, however, these companies, decided to spend a bit more at Rs 12,461 crore. But Rs 1,343 crore eventually remained unspent translating into the final actual expenditure of Rs 11,961 crore compared to Rs 10,179 crore last year, primarily because some companies spent more than what was mandated or decided earlier by them.

The number of companies that spent on CSR went up to 1,055 in 2018/19 from 1,024 in 2017/18. The balance 77 companies, despite being mandated, did not spend anything. The top 10 companies which includes the likes of Reliance Industries, ONGC and Indian Oil, together spent 36 per cent of the total CSR spends. Overall, 653 companies or 64 per cent increased their spending from the previous year. There were 488 companies among them that exceeded their prescribed spending and 37 companies, which despite reporting losses, spent on CSR. PSU spending saw an increase of 4 per cent from previous year. On the other hand, 332 companies missed the mandatory spending of 2 per cent of net profit, down from 353 in 2017/18. In line with the previous year, education received the maximum spend of Rs 4,440 crore followed by healthcare (Rs 3,242 crore). Areas such as armed force veterans, technology incubators, slum development and disaster management saw negligible spends. In comparison to previous year though, spends on armed force veterans increased the most, at 84 per cent followed by spends on reducing inequalities (41 per cent) and healthcare (25 per cent). However, spends on national heritage fell the most at 55 per cent. Allocation to different schedules, though, remained fairly constant over previous year.