PVR-Cinepolis India in talks for a Rs 13,600-crore merger

The country’s largest multiplex chain’s parent PVR Limited is in talks to strike a Rs 13,600-crore merger deal with rival and third largest movie theatre chain Cinepolis India, according to four sources who separately confirmed to Business Today that a deal is being worked out.

The deal, if it comes to fruition, will see the coming together of PVR’s 860 screens and the 400 screens owned by the India business of Mexico-headquartered Cinepolis’s in the country. Cinepolis is the fourth largest film exhibitor after Inox and Carnival Cinemas which has 667 screens and 450 screens in the country, respectively. 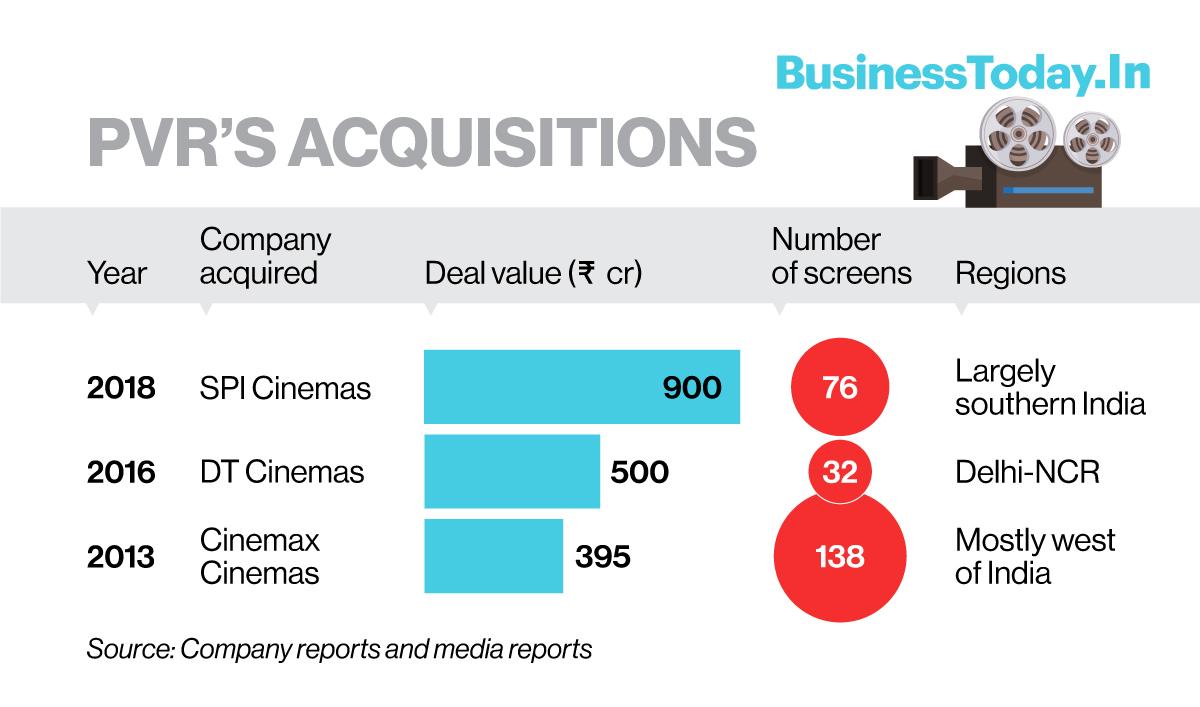 The deal is critical for PVR because, unlike its previous acquisitions – south-centric SPI Cinemas, Cinemax Cinemas largely present in the west and Delhi-NCR-focused DT Cinemas – Cinepolis India’s 400 screens spread across 22 cities will strengthen its pan-India presence. The development also comes against the backdrop of the Covid-19 pandemic decimating film exhibitors’ revenue owing to multiple lockdowns across the country.

“A complete buyout of Cinepolis India maybe one option. But it would mean a serious fund outgo and debt surge for PVR. In a normal situation, the company may have approached the banks for the money, but after the Covid crisis has ravaged its balance sheet, the chances of that happening are slim,” said one source, confirming that a deal between the two rivals is in the works.

“So, it could be a merger where fresh shares are issued to Cinepolis as a strategic partner. It may be a no-cash, all-stock deal so that PVR can maintain its debt,” said another source, also confirming the developments.

Further, the sources said, with the promoter and promoter group holding only 17.02 per cent in PVR Limited as of December 2021, Chairman & MD Ajay Bijli and his family may even cash out of the business at some point in future. Domestic institutional investors hold 20.1 per cent. For instance, Renuka Ramnath-promoted Multiples Equity Fund, an early investor in PVR Limited, holds 4.31 per cent. Foreign Institutional Investors hold 31.9 per cent and the remaining categories account for 31 per cent. Sources say second largest exhibitor INOX Leisure is also in the fray to buy Cinepolis India, but PVR is the frontrunner. INOX, which has 667 screens across India, bought Gurgaon-based Satyam Cineplex in 2014 in a Rs 182-crore deal to strengthen presence in north India. Earlier in 2010, it paid Rs 66 crore for 43 per cent in Fame India, which had 95 screens in 12 cities. In 2007, it acquired Calcutta Cine Private Limited. INOX’s revenue crashed from Rs 1,915 crore in FY20 to Rs 148 crore at the end of FY21.

PVR did not respond to Business Today’s email queries, while INOX and Cinepolis India refused to comment for the story.

Cinepolis, which is not listed in India, had to tweak its global ‘megaplex’ strategy for a diverse market like India. While the chain globally has an average of 10 screens at each multiplex, it has six here.

In August 2018, when the last big-ticket transaction took place in the multiplex space, PVR acquired SPI Cinemas, an entity largely based in the south – especially Tamil Nadu – and known for brands like Sathyam, Escape, Palazzo, etc., for an initial sum of Rs 633 crore for a 71.7 per cent stake.

For Cinepolis India, whose 400 screens in India accounts only for a fraction of its Mexican parent’s 6,700 screens worldwide, the deal would mean a continued presence in India at a time when Covid has taken the sheen out of the movie exhibition business. The firm, the only exhibitor in the country with an international backing, acquired all 83 screens of Fun Cinemas from the Essel Group in early-2015, reportedly for an enterprise value of Rs 550 crore.

It will have to be seen whether the PVR-Cinepolis multiplexes are rebranded under the merged entity, although it may not be necessary to kill the Cinepolis brand, said one of the sources, pointing out that the deal will also have to pass through Competition Commission of India’s scrutiny given that it could create a monopoly.