Five big business leaders will be glued to their television sets intently watching the political outcome of the UP polls purely for economic reasons. If Samajwadi Party chief Mulayam Singh Yadav forms government, it will be industrialist Anil Ambani and Subrata Roy of Sahara, who will be expected to surge ahead.

If Samajwadi Party (SP) chief Mulayam Singh Yadav forms government, it will be industrialist Anil Ambani and Subrata Roy of Sahara, who will be expected to surge ahead with his backing to bag big business opportunities in the state.

Kushagra Bajaj, whose interests in the sugar industry has seen a setback under the Mayawati government, will hope to bounce back. This was amply reflected in the stock markets on Monday, which saw the share prices of his Bajaj Hindusthan sugar mills rising 2.5 per cent on the back of exit polls placing Mulayam ahead in the race for the chief minister's post. 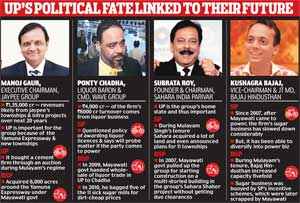 Click here to Enlarge
Bajaj, who managed to strike a rapport with Mayawati and diversify into big power projects, will be able to forge ahead on the sugar front as well if old friend Mulayam is back at the helm.

Gurdeep Singh Chadha alias Ponty Chadha was the biggest gainer under the Mayawati regime as the loss-making sugar mills of the UP government were sold to him for a song. The Comptroller and Auditor General of India has indicted the Mayawati government for handing over the sugar mills to Chadha at dirtcheap prices without following the proper auction norms.

A Samajwadi Party leader said that if the party comes to power, it will order an enquiry into the issue. Ponty, who was raided by the income tax department on the eve of the UP elections, has also built up a huge real estate empire and cornered the lucrative wholesale and retail contracts for liquor sales under the Mayawati regime. Clearly, he stands to lose if she does not make it back to power.

Diversified group Jaypee chairman Manoj Gaur has done well under the Mayawati rule in UP but he is reported to be equally comfortable with any regime in power. The fact that he has built up a core competence in the construction sector enables him to deliver projects at the ground level which governments want. 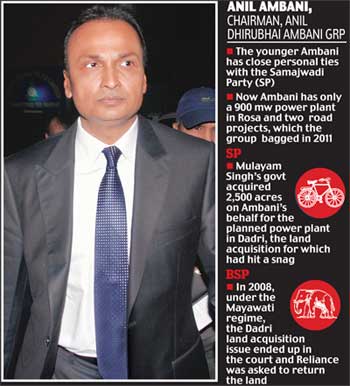 The 165-km Yamuna Expressway is a huge contract that he has been able to execute adhering to the timelines.

The UP government has also given Gaur's group 6,000 acres land on either side of the road on a 90-year lease for developing five townships in Gautam Budh Nagar, Noida, Aligarh and Agra. By building the Budh International Racing Circuit alongside the Expressway, Gaur has shown that Jaypee can roll out large projects with great aplomb.

It is Ambani and Roy, who have lost out in the state due to their proximity to Mulayam. Naturally, Ambani, who has the capacity to take up mega infrastructure projects, will look for the right opportunities while Roy, who has seen a slowdown in his business plans, can hope to get back to the high growth trajectory.