News
LATEST
Economy Politics
69%! India now has highest taxes on petrol and diesel in the world

Taxes account for 63 percent of the retail price of fuel in France and Germany, 64 percent in Italy, 62 percent in Britain

The steepest ever hike in excise duty by Rs 13 per litre on diesel and Rs 10 per litre on petrol last night has catapulted India as the country with the highest taxes on fuel.

With these hikes, every litre of petrol in Delhi that currently retails at Rs 71.26 includes taxes of Rs 49.42 while for every litre of diesel at Rs 69.39 it is Rs 48.09. Taxes now comprise over 69 percent of the pump price of the two fuels, which is the highest in any part of the world. While the hike in VAT saw a rise in fuel prices in Delhi on Monday, the increase in excise duties has not affected retail prices as the government had not passed on the benefit of low crude prices to consumers this year. The increase in duty simply subsumes that headroom.

The Indian basket of crude oil price has crashed over 64 percent this year from $65.5 per barrel in December 2019 to just $23.38 per barrel on Monday. Last month, it had touched a low of $19.9 per barrel. Retail prices however did not come down commensurate to this decrease and remained steady at Rs 69.87 per litre for petrol and Rs 62.58 per litre for diesel in Delhi for the whole of last month. 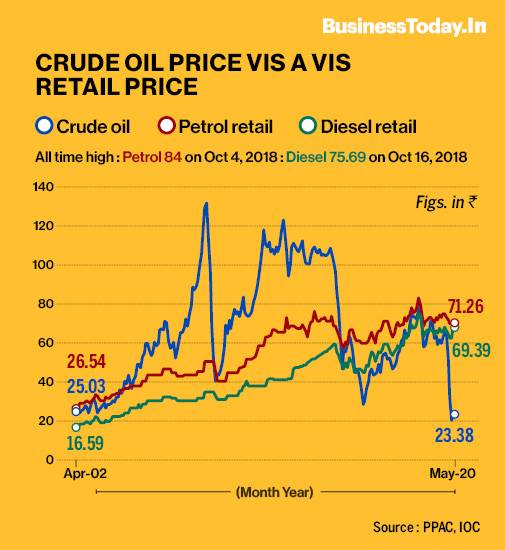 The fresh round of duty hikes is a recurring theme for the governments both at the state and the centre, squeezing oil to compensate for shortfall of revenue elsewhere. The centre had on March 13 this year, hiked duties on petrol and diesel by Rs 3 per litre, once again, to subsume the benefit of decline in crude oil price.

"This is daylight robbery but the government will get away with it saying desperate times need desperate measures," says a petrol pump owner from Delhi. "They have not used but abused oil whenever it suits them. The common consumer is always at the receiving end."

With the country in lockdown mode since end of March to fight the coronavirus pandemic, all economic activity is at a near standstill which has substantially impacted revenues for the government. While the centre has delayed the release of monthly GST figures, several state governments like Delhi, Andhra Pradesh, Assam and West Bengal have reported a 90 percent drop in tax collections in April.

The increase in duty on fuel is however unlikely to offer any major relief to the government as demand for oil in the country has also taken a big hit. India has benefitted from the low crude prices utilising the opportunity to fill up its strategic reserves to the brim, but oil demand in the market has collapsed by almost 70 percent in April. It is likely to remain subdued in the next few months as economic activity and domestic consumption will only resume in a staggered manner.

"India has also seen almost 70 percent decline in oil and gas demand. The oil and gas sector is going through unprecedented challenges. Despite challenges, our refineries are operating, supply chain working," Oil minister Dharmendra Pradhan said. "India has been able to fill its strategic reserves of petroleum products. Our oil companies have procured almost 7 MMT oil at low prices. Almost 20 percent of our demand has been stored. This has also led to reduced import bill which will help us free more resources for public welfare measures."