The Imran Khan government's decision to lift the ban from India come as a relief for the country's textile sector, which seeks access to cheap raw materials

Pakistan's Economic Coordination Council (ECC) has allowed the import of cotton and cotton yarn from India. The proposal was presented before the top committee for approval at a meeting convened by the country's commerce ministry officials. The Pakistan ECC met on Wednesday and decided to allow import in an effort to reopen the Indo-Pak trade, Pakistan's Geo TV reported.

The panel took up two summaries of the commerce and textile ministry to lift the ban on the import of cotton and cotton yarn, and white sugar from India. The country's economic coordination committee has also reportedly approved 0.5m metric tonne sugar import from India. 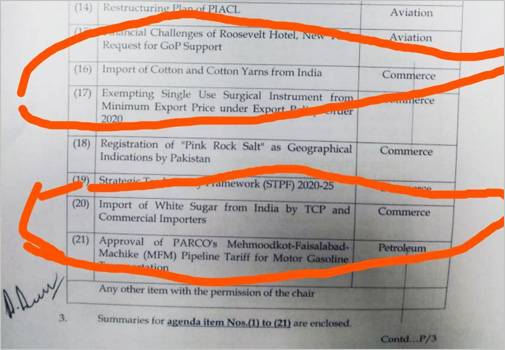 The low yield of cotton bales in Pakistan has created problems, paving the way for imports from India. Imran Khan government's decision to lift the ban comes as a relief for the country's textile sector, which desperately needs access to cheap raw materials. Some cotton industry stakeholders in Pakistan, however, believe the decision is going to hurt the country's farmers.

"We have already imported our required cotton from Central Asia and other parts of the world, so there is no need to grant this permission," a textile sector official told Geo TV. The government officials, however, believe the decision to allow cotton import from India will help meet the domestic demand at reasonable rates.

Pakistan had suspended trade ties with India after New Delhi revoked the special status of Jammu and Kashmir in 2019.  The positive developments between India and Pakistan continue since Indian and Pakistani armies agreed to strictly observe the ceasefire along the Line of Control (LoC) in Jammu and Kashmir and other sectors on February 28.

Both countries have recently shown commitment to revive ties after the 2019 Pulwama terrorist attack and withdrawal of the special status to J&K in August 2019.

PM Modi wrote a letter to Imran Khan on Pakistan Day last week on March 23, talking about India's desire to have cordial relations with Pakistan, adding an atmosphere of trust without terror and hostility is "imperative".

In return, Khan also wrote back, seeking the creation of an 'enabling environment' suited for a constructive and result-oriented dialogue to resolve outstanding issues, including that of J&K. "We are convinced that durable peace and stability in South Asia is contingent upon resolving all outstanding issues between India and Pakistan, in particular, the Jammu and Kashmir dispute," Khan wrote.

Also Read: Pakistan suspends import of cotton from India due to rising tension in ties