It's a deadlock! A deadly one -- that threatens to claim both lives and livelihoods. Between those who believe supply-side measures such as the ones announced in dribs and drabs by the government since August, 2019 are good enough to put Indian economy back on growth path; and those who believe instead that the economy needs demand generation and consumption to turn around.

Simply put, it's a standoff between the proponents of supply side economics and those who think that over-dependence on that process will lead to a prolonged, destructive and painful recovery. And that demand-stoking measures are inevitable.

On the other are some of the world's best known economic theorists such as Raghuram Rajan, Arvind Subramanian, Meghnad Desai, Kaushik Basu, C Rangarajan, D Subbarao and other such noted names.

...YOUR ECONOMICS VERSUS MINE

Indian economy is the biggest casualty in the preposterous game of 'your economics versus mine'. Neither side is budging in a prolonged altercation that has lasted 8 quarters now (see how India's quarterly GDP slumped from over 8 per cent to 3.1 per cent). But it will indeed decide the fate of our nation -- whether India goes deeper into an economic morass or recovers miraculously when lockdown lifts entirely.

There is merit in Modi government's resoluteness in not splurging like the West on a recovery. It fears splurging would worsen fiscal deficit (already expected to near 6 per cent mark), raise Centre's debt burden and risk sovereign ratings downgrade which could potentially hurt future investments. Can India afford to exhaust all its ammunition as the West has? After all, as FM Sitharaman explains, nobody knows how long we will have to deal with coronavirus. 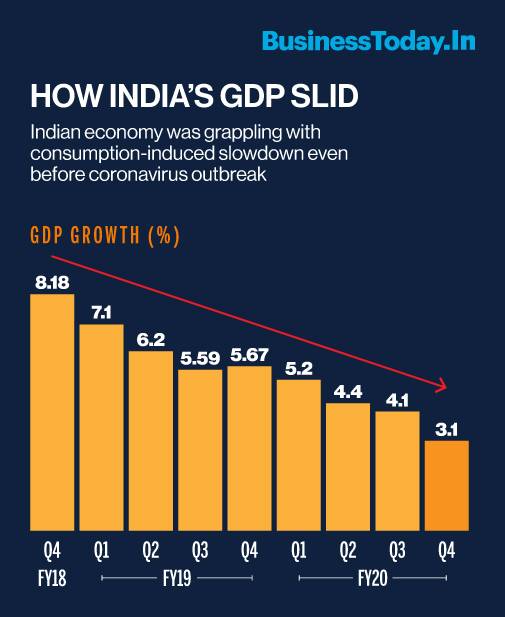 As the sole custodian of public money, Centre is judicious, extremely frugal and tight-fisted in deploying the meagre resources at its disposal with those who need them the most. Nearly all the resources from the government's kitty have been spent on boosting MGNREGA jobs, providing food to the poorest, direct benefit transfer to farmers and to Jan Dhan Accounts of women, free LPG cylinders to BPL families and relief to building and construction workers. Centre strongly believes these will generate sufficient demand in the economy.

Every other initiative -- right from August onwards -- has been towards strengthening the supply side: Regular liquidity infusion by RBI; PSU bank mergers; EMI deferment, compliance relaxations and a one-year freeze on bankruptcies.

BUT WILL THESE WORK?

Not quite. In the absence of demand generation measures, when they haven't worked in reviving the economy in 8 quarters in better times, it's highly unlikely they will work when the economy is already under stress.

The rest have been structural measures such as the plan to abolish APMC Act to let farmers decide who they wish to sell to; local manufacturing of defence equipment by private sector; new health and education infrastructure; new coal and mineral infrastructure; upgradation or industrial parks; or creating farmer-producer organisations. But none of those are capable of delivering results to revive the economy in a quarter or two. Not even a year or two. Instead, their effect may be visible in 3-5-7 years, depending on the nature of the reform.

After all, this is not a generic economic cycle of downturn -- neither cyclical, nor structural. This is once in a lifetime crisis -- an inexplicable pandemic that has stalled the world economy.

The reason India finds itself in the comity of nations that can ill afford a big stimulus to stoke economic growth is the 8 quarters of wait-and-watch game played in the run-up to coronavirus crisis.

At a time when economists and India observers around the world were exhorting the Centre to push demand and consumption in the economy through tax cuts; make goods and services affordable; leave disposable income in the hands of individuals; investible surplus in the hands of corporates, India was doing exactly the opposite.

Instead of taking steps to trigger demand in the economy, every move of the government of India (including the Piyush Goyal Budget and the 2 Budgets by FM Nirmala Sitharaman plus the Atma Nirbhar Bharat Package) and every other measure to kickstart the economy has been around supply-side economics of enhancing liquidity, creating enablers to growth, ease of doing business and ease of compliance to statutory norms.

As a result, when coronavirus hit us in January, 2020 India's economy was at its weakest after decelerating sharply from over 8 per cent growth to less than half of that of just above 3 per cent. In contrast, most of the world economy was on an upswing. Nations such as US, UK, Japan and Germany that are going full blast to save their economies from the impact were also the nations whose economies were on an upswing when coronavirus hit them.

WHY THE NEED TO STOKE DEMAND

Proponents of demand generation led recovery recommend most of what the West has been spending its warchest on: social benefits such as unemployment stipend; saving firms through government dole towards employee salaries during lockdown; interest-free loans, even grants to restart businesses, utility payment holidays during lockdown and others. 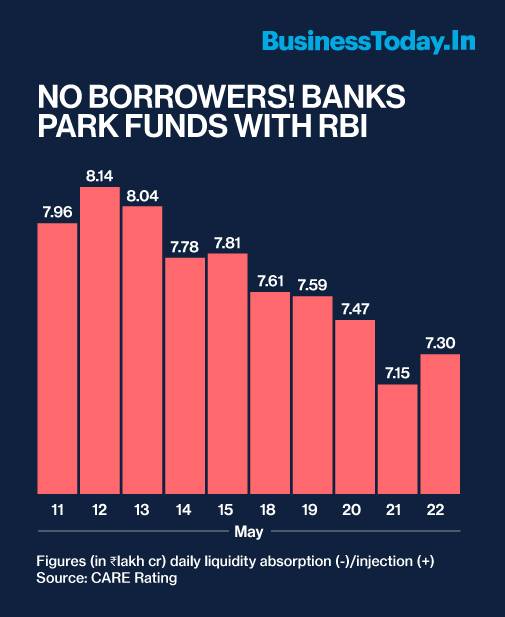 Modi government baulks at such freebies. Its motto: 'You can lead a horse to water but you can't make him drink'. Firms must stand on their own feet. Hence, it would rather provide 100 per cent guaranteed loans than grants. But who wants to load on more debt in such uncertainty? With few borrowers on the horizon, the banking sector is awash in liquidity. So much so that as of May 23 banks had to park an astounding Rs 7.5 lakh crore of unutilised funds with RBI at a rate of 3.35 per cent -- a loss of at least 0.65 per cent since banks themselves borrow from RBI at 4 per cent. SM Sitharaman says nearly 3.5 lakh crore of these were loans sanctioned but not availed by businesses.

But this deadlock needs to be broken.

SO WHAT'S THE WAY OUT?

Do not worry about depleting the water in overhead tank when you need to put out a fire in the house.

Centre needs to find a way out between being over-cautious and being foolhardy. Extremes of either could sink the economy to depths from where recovery will be harder.

Here's how to walk the tightrope, keeping all of Modi government's objections to freebies in mind:

The quickest way to generate demand in an economy is through widespread cash transfers. But that needs to be sustained over 6-9 months to be effective. Besides the poor, this could be as wage support for employee costs during lockdown. One-time transfers attempted so far largely go towards sustenance living. They can only create bumps, not revival. Perhaps, some FMCG sales. Since GoI does not have the resources to sustain cash transfers, here's option 2.

Widespread tax cuts -- both direct and indirect are the second fastest way to turn around the economy. Taxes cut across the board -- including GST and personal income tax -- will make goods and services affordable and will leave money in the hands of individuals to spend on them.

But with GST collections falling as much as 70-90 per cent during lockdown across different geographies in the country, this looks highly improbable. Even though the government has the option to make up for the shortfall possibly through debt monetisation.

That brings us to the one option that has been used over and over again to pull struggling economies out of economic downturns around the world -- accelerating public expenditure through infrastructure building. US and Germany, for instance, engaged in massive highway building spree after the depression to turn around their economies.

This should not prick the conscience of the Modi government. Especially, since our infrastructure stays majorly deficient, not just in highways, but also education and healthcare; railways, metro rail and airports and public utilities -- just to name a few. A massive push of 5-8 lakh crore of additional infrastructure contracts awarded within a short span of 6 months could rejuvenate hundreds of allied industries, including big sectors such as steel and cement. Then, the contagion effect spreads it to other sectors.

BUT WHERE'S THE MONEY?

A substantial part of the resource generation will have to be through debt monetisation. RBI will need to print fresh money to the extent of Rs 4 lakh crore, for instance. It then subscribes to bonds issued by the government. The money in the hands of the government goes towards accelerating infrastructure projects. Print fresh money in tranches of 1 per cent of GDP or Rs 2 lakh crore at a time. Accelerate as you need more.

The remaining resources could be raised through up to Rs 2 lakh crore of debt from NRIs abroad. It's not a big deal. NRIs anyways repatriate up to Rs 5 lakh crore annually. With near zero interest rate in most countries, GoI bonds even at 4-6 per cent would be attractive propositions.

About Rs 5-8 lakh crore of additional spending on infrastructure will raise India's debt to GDP ratio from just a shade under 70 per cent to nearer 80 per cent. In contrast, US, Japan, UK, Germany and France are at 100 per cent or well past 100 per cent -- Japan well over 200 per cent. 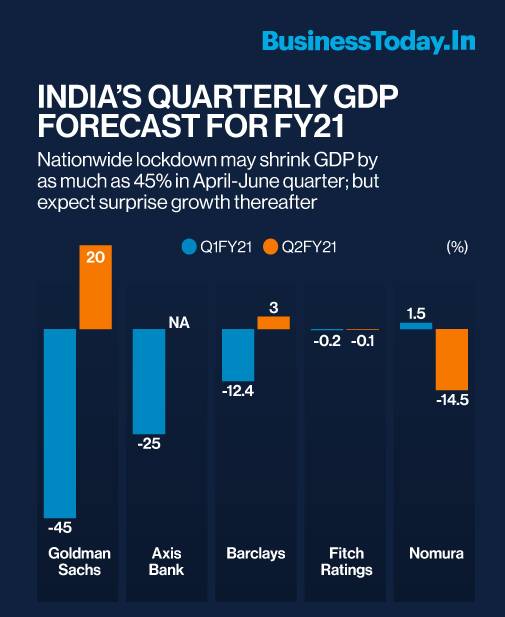 For the first time in 22 years, Moody's has downgraded India's sovereign credit rating from baa2 to baa3, the lowest in investment grade.

But sovereign rating downgrade fear -- though real -- may be highly over-rated. These ratings represent a nation's ability to service interest and principle on sovereign debt. Agencies decide ratings on the basis of 3-4 factors: GDP growth and fiscal deficit; sovereign debt, especially external debt; government policies and their effectiveness and reserves (forex and gold). On none of these parameters is India in any alarming state just yet.

Also ratings downgrade impacts a nation in 2-3 ways: One, it's a signal to investors to not invest. But with most of Fortune 500 companies and large portfolio investors already present in the country, their investment decisions are likely to be independent of ratings due to their inherent understanding of the local business environment.

Two, it impacts Indian companies looking to raise funds abroad through external commercial borrowings (ECBs); they may have to pay a higher rate of interest. India had $51 billion worth of ECBs as of FY20. But with global markets sloshing in unutilised funds, it's already a borrower's market. Firms will have the power to negotiate better deals, irrespective of downgrade.

Three, it may impact Government of India bonds in international market adversely. The Moody's downgrade will have marginal impact though India's external debt as a percentage of GDP is a manageable 20 per cent.

SIGNS OF A LIQUIDITY TRAP...

There are clear signs India is in the grip of a liquidity trap -- a situation when individuals and businesses continue to hold their resources instead of spending on goods and services or invest in capacity creation, respectively.

An expansionary monetary policy pushed by banking regulators by successive lowering of interest rates does not work in a liquidity trap even if interest rates are lowered right down to zero per cent as proven after the Great Recession of 1930s.

Hence, it's imperative to break the deadlock with some effective demand-side measures which could potentially stoke consumption in the economy.

The vital signs of the economy are ominous. Goldman Sachs predicts India's economy may shrink by nearly half (45 per cent) in Q1 of FY21, Axis Bank predicts 25 per cent shrinking.

It remains to be seen whether history will remember Modi government's battery of economic advisors as economic heroes or as Neros who fiddled while Rome burned!